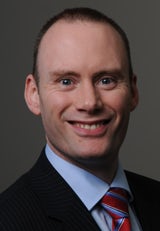 He is a former managing director and head of marketing at AA Financial Services and marketing director for Principle Insurance Holdings.

He reports to group director, strategy, marketing and customer Clare Sheikh and will be responsible for building excellence and capability in all of RSA’s marketing teams in over more than countries across both B2B and consumer businesses. He will also have a particular focus on driving improvement in bottom line performance through the use of shared analytical tools.

Sheikh, previously known Clare Salmon, is a former sales and marketing director at the AA. She joined RSA in May 2007 after leaving her marketing director role at ITV in a few months earlier, shortly after the arrival of Michael Grade as executive chairman at the broadcaster.

Commenting on his appointment, Clare Sheikh said; “Lloyd is uniquely well placed for this role given the breadth of his financial services experience. He brings a robustly commercial approach reflecting his previous general management roles and venture capital experience.”

RSA is the owner of the UK direct insurance brand MoreTh>n. The latter launched a campaign at the end of last year voiced by star of The Mighty Boosh Julian Barrett and crated by Fallon.