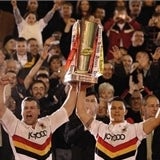 The Rugby Football League (RFL) is taking its search for a new sponsor for its Challenge Cup tournament to the internet.

The league has tied up with Getmemedia.com, an online match-making service between marketers and those with marketing opportunities, to search for a new title sponsor for the competition from the 2007 season onwards.

The Challenge Cup is currently sponsored by Powergen, but that deal will draw to a close after this year’s final in August, following the power company’s decision to sponsor the FA Cup instead.

The Cup is the RFL’s most prestigious competition, with live matches broadcast on the BBC and the draws for each round taking place on BBC Breakfast News.

The sport, which at times struggles to gain exposure against the rival rugby union code, claims to have a fan base of 10 million supporters. The RFL says the Cup final is expected to draw a crowd of 92,000 next year at the Wembley Stadium once it opens.

Getmemedia.com was set up in February this year by former Nestlé media controller Peter Davis. Its service is used by, among others, ZenithOptimedia, Initiative, MindShare and MediaCom.