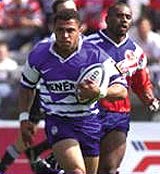 Super League Europe, the body responsible for marketing UK rugby league, has yet to secure a headline sponsor with less than three weeks to go before the start of the season.

The most recent sponsor, JJB Sports, signalled its intention not to renew its two-year contract early last year. The sports chain, owned by chairman David Whelan, has switched its spend to a stadium-naming rights programme with Wigan Warriors.

Super League, which is broadcast exclusively on Sky Sports, is understood to have been seeking a three-year deal worth about £1m a year. A spokesman says: “We are still negotiating with a number of parties, but as yet nothing is signed.”

He denies speculation that telecoms giant BT had been interested but pulled out.

Last year, Super League launched a “raunchy” cinema and outdoor ad campaign aimed at women in an attempt to broaden the game’s appeal beyond its Yorkshire and Lancashire heartland.

Sponsorship observers say the league will struggle to meet its £1m target. One source says: “The main trouble is that it’s simply not a national sport, and no matter how hard they try to make it ‘sexy’ it is not an attractive proposition to a major sponsor.”