Topping a list of 15 sponsors with a score of 303, Mastercard was credited for having the “right mix of paid promotion of competitions and smart placement of content”.

Closely following Mastercard was DHL in second place with a total of 295 points, Land Rover in third with 289 points and Heineken in fourth with 273 points.

“The smart strategy was to pull fans into your brand with a competition and then sustain their interest with more engaging content later on,” said Gareth Davies, head of digital and insight at WE.

“To this point both Mastercard and DHL performed very well. Mastercard, which remained mostly online for the majority of the tournament, then in the last few weeks began asking fans to post their favourite ‘priceless’ moments from the event. It was a winning strategy.”

The Brand Agility Index works by scoring brands between one and five points on 10 categories including standout; how the brand stood out amid other content, right to play; could a brand justify its position at the tournament; relevance; originality and sentiment reaction. It achieved this by analysing all conversations and engagement levels from brands throughout the Rugby World Cup.

With the tournament running for 44 days, Davies believes the winning strategy was for continued constant engagement. He adds: “Where brands’ main focus was competitions we saw daily engagement pushes, which meant that the brand was visible throughout the tournament and due to the sheer volume of engagements easily trended.”

And during Saturday’s (October 31) final, it was Mastercard who came out on top as the financial brand saw its weekend conversation volumes exceed those of the last three weeks combined. The engagement it secured around its Man of the Match/Tournament/year awards was particularly successful.

Despite England’s exit from the competition, the tournament has been a “big success” due to consistently high attendance and great examples of marketing according to Joel Seymour Hyde, VP strategy at Octagon.

He says Heineken and Mastercard ran the best campaigns out of the official sponsors due to “strong ambassadors” and “unique digital strategies.”

Looking beyond the official sponsors, he also credits Samsung. “They had a nice engaging above the line with likeable legendary players and a high profile contemporary comedian in Jack Whitehall; it generated a lot of warm sentiment.

“Overall, I think a lot of brands will have looked at the tournament and seen how rugby is unique in its ability for brands to connect emotionally and put across really positive stories like Guinness have done. Brands who haven’t got involved with rugby before will have had their heads turned.”

However, he does concede that England’s exit has had a negative impact and not just on O2. “With England going out, the domestic leagues will suffer the most as unlike 2003 there won’t be that same buzz for people to go see the English players for their respective clubs.

“Yes, the best two teams are in the final, but if you were being harsh you’d say there isn’t a great amount of buzz going into the final due to England underperforming.”

“With such high viewing figures, you can see the vultures circling as Sky and BT will certainly be more interested,” he adds.

And, for brands looking to sponsor rugby for the first time in the future, he advises: “If you want to attract the affluent rugby fan, you need to go for ex players, have some comedy, a number of different executions and evolve the campaign as the tournament progresses. Samsung have done the best job of that in my eyes.” 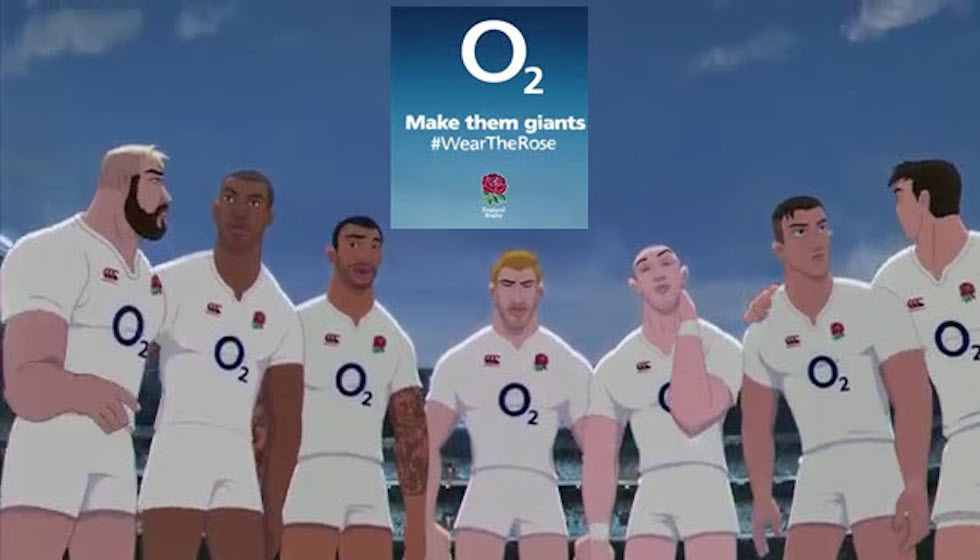