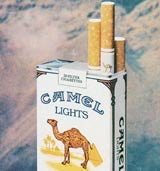 Tobacco firm Gallaher is to repackage its cigarette brands Camel Lights and Camel Ultra Lights as Camel Smooth and Camel Refined, to circumvent the European ban on misleading taste descriptions such as “light” and “mild”.

At the same time, its two variants of Silk Cut will be called Blue and Silver, rather than Extra Mild and Ultra. Low-tar options for brands, such as Sterling, Sovereign, Mayfair, Dorchester and Superkings, will be known as Smooth. The altered packets will filter into retailers by June as old stock runs out.

Industry sources have said that Philip Morris is likely to rebrand Marlboro Lights as Marlboro Gold. Philip Morris was ordered to pay $10.1 bn (&6.5bn) by a US court last week for misleading customers into believing that its low-tar and light cigarettes were safer than regular versions. Similar lawsuits are expected in Europe.

Tobacco manufacturers failed to overturn a European Union ruling against descriptive terms that suggest certain cigarettes are less harmful than others. Manufacturers have also been instructed to increase the size of their health warnings by more than 30 per cent. The changes must be in place by September 30, 2003.