We should not be surprised, however, that Kraft seems to have got its way. Since Irene Rosenfeld, Kraft’s chief executive, had already sold its North American frozen pizza unit to rival Nestle for $3.7bn to raise extra cash, she desperately needed the Cadbury deal to go through. Without winning any new business as a result, it could be asked why on earth you would sell a profitable frozen pizza unit during a recession, at a time when such products are more lucrative than ever before?

But what does this mean for the brands?

1. Debt. Kraft has a heavy debt, which will increase now so that it can execute the Cadbury takeover. It is certainly a worry for Cadbury how much debt will be passed on. After all, look at the case study of a fellow British icon that has passed into American ownership: Manchester United.

When football club Manchester United was bought by the Glazer family in 2005 in a £790m debt-financed takeover, the club took on some of the debt of its new owners. Statements from 2009 show that the club paid £41.9m in interest and without selling player Ronaldo for £80m, the club may well have made a loss. Its owners are seeking a bond issue to raise £500m to ensure the club meets its financial targets over the next few years. This is a very different situation from a few years ago, when the club regularly topped the richest football club in the world tables and appeared debt-free.

2. For Brits, Cadbury is more than a company; it’s a British icon. By passing into American corporate hands, Cadbury’s 186 year history as an independent business based on Quaker ethics – something which runs strong in the business even today – comes to a close. Now, rationally, that might not make much difference to your average shopper, but emotionally, it’s a blow for many Britons.

Brits are some of the world’s highest spenders on chocolate (sales were up 5.9% in the UK last year, compared to just 2.6% in the US) and the sweet brown stuff has a particular resonance with shoppers here. We are chocoholics. Kraft will have to tread very carefully so as not to threaten this. The business should take note of Unilever’s purchase of Ben & Jerry’s ice cream. At the time, there was an outcry that the small brand had been swallowed up by a huge multinational, but consumer complaints seem to have largely fallen away – Unilever has always been careful to run the brand as a separate division (with its own location) and stayed relatively true to the brand’s quirky philosophy.

3. Potential overseas growth for Kraft. Cadbury has operations in emerging markets such as India and Latin America, where Kraft’s portfolio has yet to make an impact. For example, in Latin America’s Cadbury’s Trident gum has helped it to sales of around $500m, outpacing Kraft’s $350m. And in places like Thailand, Egypt and other Asian countries, Cadbury is the largest confectioner, with international markets making up around 38% of its global sales, compared with around 20% at Kraft. By combining its own operations with Cadbury’s presence in these markets, it gives Kraft the chance to be a truly global brand, rather than merely an American one with outposts in other markets.

The longer-term implications of the deal will take time to show. Well, unsurprisingly, the British are anxious about potential job losses. Kraft is known for its cost cutting and unions reckon as many as 30,000 workers could be at risk. And what of Cadbury’s move towards making its products fair trade? This is a very important step for the business and incredibly important to UK shoppers, but will it be meaningful to the new American bosses?

We can only hope that since many of Kraft’s own products has brands dating back to the 1700s, the firm will understand the importance of preserving Cadbury’s legacy (as well as its workforce and ethics). We shall have to see.

In the meantime, I’m going to spend some time working out just what some of the products in the Kraft portfolio actually are…….Miracle Whip? Dream Whip? Cool Whip? “Whipped non-dairy topping” – just what is this stuff? Anyone?

Dieting company Cambridge Diet is to re-brand itself as Cambridge Weight Plan, and will launch a national advertising campaign to promote its new name. 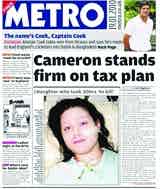