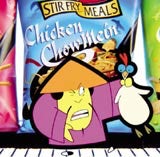 Ready meals company RVP Foods is to change its name to Oriental Express Frozen Food Company, to reflect the importance of the brand to the business.

The change will take place at the end of October. RVP was formed in December 1997, following a management buyout from United Biscuits. Since then, the company claims that it has more than doubled in size to become the UK’s third-largest ready meals maker, behind Heinz and market leader Birds Eye Wall’s. The frozen ready meals market is worth about £500m.

Last month, the company launched two television ads as part of a £5m marketing campaign to promote the Oriental Express range (MW September 12). The ads, which were created by Doner Cardwell Hawkins, introduced animated spokesman Mr Mo, a successor to the Mental Oriental character used in ads two years ago. The Oriental Express range has been relaunched this year with two new products: Sizzling Stir Fry and Stir Fry Essentials. It was the biggest ever marketing investment in the brand.

The company is expected to launch further new products over the next 12 months.