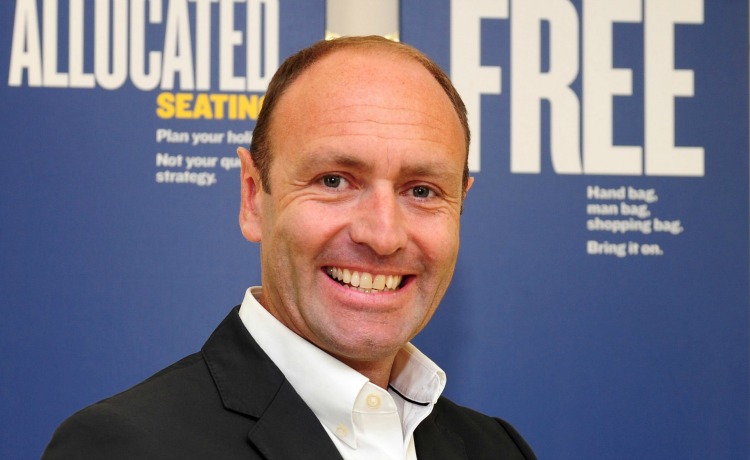 Ryanair CMO Kenny Jacobs is a great believer in common sense marketing. “Do I believe less in brand marketing than I used to? Yes to a degree,” he reflects.

“Do I believe less in all the shiny new stuff of digital marketing than I used to? Yes I do. You just need to have a common sense approach and do the right things for your particular brand, but stay fast and stay agile.”

According to Jacobs marketing has changed forever, particularly as the worlds of traditional and digital have blurred to become simply marketing. As a result, the role of the CMO has evolved dramatically since new graduate Jacobs joined the sales and marketing team at Procter & Gamble in 1997.

“To be a good CMO you need to have bags of common sense and be a good operator. You can’t be one of those people who’s going to be labelled as ‘a brand person who just wants to make ads’,” Jacobs warns.

We’re the world’s most searched for airline website and we spend nothing on Google because everyone knows what we stand for.

The CMO skillset has never been more varied, says Jacobs. As well as leading on customer service, top marketers need to be financially savvy and highly effective at communicating their ROI.

Future CMOs should also be prepared to take on a customer facing role, the Ryanair CMO argues, whether that means working on the shop floor of a supermarket or on the desk of an airline. Meeting this list of requirements should be a call to arms for marketers, Jacobs insists.

“Good marketers out there should see what I’ve described as a really great role, but average marketers or people wedded to the past will say that sounds hard and complicated. The good ones will go for it.”

In essence, Kenny Jacobs’ common sense approach is focused on the fact that marketing has to deliver. This philosophy informs the way the Ryanair team operates, from owning as much digital expertise in-house as possible to saving money on TV advertising and Google.

“We maximise earned and owned media as effectively as anybody can and as a result we can invest less in paid media, be it TV advertising, be it Google. We’re good on social, we say controversial things, we talk to the press and we’re very accessible and outspoken.”

Jacobs believes brands should own as much of their digital destiny as possible, especially as, in his opinion, a high percentage of digital marketing has been exposed as “bullshit metrics and ad fraud” over the past three years.

In his opinion anyone can put money into “the Google machine” and drive PPC visits, but it is more important for marketers to get the difficult things right like SEO, content marketing and driving traffic to their website in a low-cost way.

READ MORE: Ryanair launches holidays with promise to keep being ‘bastards on cost’

“And absolutely marketers should be able to look at a website and know how that website is working, what’s the code behind it,” Jacobs states.

“Immerse yourself in as much as you can and retain your common sense. And marketers should treat marketing like it’s their own money and be a tight bastard with it.”

Based on his wide definition of the CMO, Ryanair’s top marketer is firmly of the opinion that to employ a CMO and a chief digital officer does not make sense.

“I think you’ve hired two wrong people, so start again and hire the right person who can do both, because marketing is just marketing,” he says simply.

Consumers don’t trust any brands and they don’t engage with advertising and communications the way they used to.

Jacobs has learnt to embed himself in digital during a 20-year marketing career spanning roles at Metro Cash & Carry, Tesco and online comparison site Moneysupermarket.com. He joined Ryanair as the airline’s first CMO in 2014, finding an instant affinity with the company’s discount mentality.

“I don’t think I’m ever going to be the marketing director for a luxury brand because I love discount brands and I think the consumer is moving towards discount brands,” Jacobs reflects.

Jacobs admits that it took him a while to get his “head around” marketing at Ryanair. Coming from Tesco and Moneysupermarket, where the focus was on communicating your way out of a market share decline, joining the airline felt like a very different experience.

“Marketing and media consumption has changed massively. Consumers don’t trust any brands and they don’t engage with advertising and communications the way they used to. So you have to focus on being good at what you do,” he states.

“Those brands that have one strong point of differentiation are doing better. Whether you’re a Ryanair on price or a Waitrose on quality or Rolex on luxury, when you have a clear differentiation in the market you do better.”

Jacobs sums the Ryanair marketing strategy up in three sentences – to be like Aldi in the air, like Amazon on digital and to innovate faster than anyone else. The strategy appears to be paying off. In June 2016, Ryanair became the world’s most visited airline website, a fact the CMO attributes to the company’s “absolute leadership” on cost.

He recalls on his first day at Ryanair drawing a graph explaining his vision to make the airline even more functional, while at the same time moving the needle on the emotional scale from being slightly disliked to being liked.

“But I just want us to be liked,” Jacobs insists firmly. “We’re still going to have the cheapest fares, but we’re nice enough. And the word is enough, which I think is really important because short-haul flying is a functional thing, it’s not an emotional thing.”

He argues that Ryanair has changed more than any other airline over the past four years, a strategy that has benefitted the company from a financial, as well as market share, perspective. However, despite the success there is no question Ryanair will shed its functional image.

“I meet marketers and they say, do you want to be loved and is it all about the brand and brand love? It’s not. Short-haul flying for me is a commodity choice. It’s about having the best schedule, the cheapest flights and being very good at execution. That’s what we do, but we don’t want to do more than that.”

The fact the airline does not trade on its emotional connection with consumers is a big difference between Ryanair and United Airlines. The US airline was slammed in April after footage emerged of security officers dragging passenger Dr David Dao off a flight in Chicago. The airline came in for heavy criticism for the disparity between its behaviour and its “fly the friendly skies” brand positioning.

Jacobs is not shy in his criticism of United Airlines CEO Oscar Munoz and his team, suggesting that whoever leads the PR team should be sacked for suggesting it was Dr Dao’s fault.

United cocked up, they said the wrong thing and then they said sorry too late.

He does not, however, believe the debacle will cause United’s reputation any long-term damage. “This hasn’t made United a toxic brand. This is the travel business. The number of consumers in the States looking for United flights hasn’t changed,” Jacobs states.

“They cocked up, they said the wrong thing and then they said sorry too late. Yes there are lots of internal lessons for them in terms of their policies and they should pay the price. They’re not saying we’re cheap and it’s a basic service like Ryanair, they’re saying we’re a friendly airline and this is the opposite of what they’re demonstrating. So it’s a mistake they made, but it doesn’t mean the end of United.”

In its bid to become the “Amazon of travel” Ryanair is diversifying into additional travel products. While flights will always be the “meat on the plate”, the company is selling more hotel rooms, holidays and car hires services, leveraging data on its 20 million My Ryanair members to offer tailored packages.

This has meant taking a more personalised marketing approach. So whereas, four years ago, Ryanair would direct car hire customers to a separate website, the team are now using information on the flyers to offer tailored car hire options for when they arrive at the destination.

“That’s targeting the right ancillary product to the right customer at the right time in the booking journey. It’s not ‘gee whizz’, that’s just called good retailing. It’s the world’s most visited airline website monetising that traffic so that people buy flights, but we also get a higher share of their wallet,” explains Jacobs. 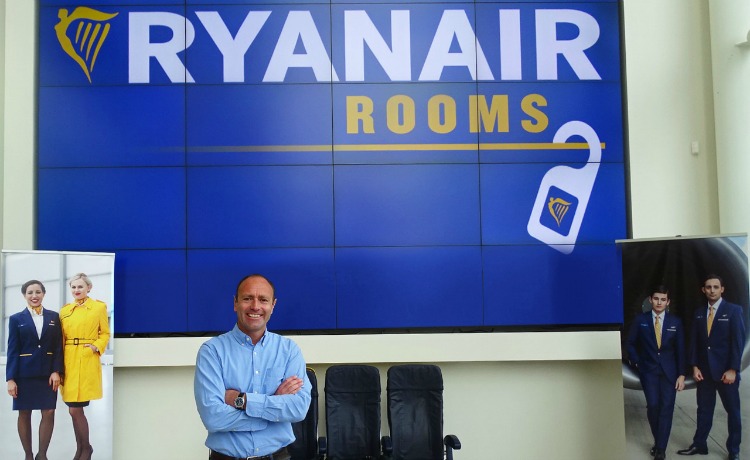 Personalised content will also play a key role in the strategy for 2017, focusing on user generated content. Jacobs explains he has no interest in “off the shelf TripAdvisor style” content, preferring to encourage customers to talk to each other about their experiences.

Despite having a dynamic strategy for 2017, Jacobs is well aware of the problems facing the travel industry as Brexit negotiations loom. Ryanair has already scaled back growth projections for 2017 to 6%, compared to the 12% growth posted in 2016.

Jacobs argues that if there is no solution to the EU–US Open Skies Agreement, which allows any European airline to fly between the EU and the US, then all airlines will be forced to reduce their capacity in the UK.

We like being a challenger and a bit of a bad boy in the industry, but not bad to customers.

“That will mean airfares go up and will reduce choice for British consumers. So the message at the moment to London and Brussels is we need you to prioritise the way you’re going to do this negotiation. Some 75% of Brits who travel on holiday go to Europe and 80% of British business people who travel are going to Europe,” Jacobs explains.

With the general election looming on 8 June, the Ryanair CMO is hoping for a “softer Brexit” which would maintain the free movement of people and ensure Britain is not a restricted place for travel.

Jacobs is well aware that to guide Ryanair through the next two years in the lead up to Britain leaving the EU he will need to draw on his formidable list of CMO skills. However, Jacobs is convinced that by maintaining a common sense attitude and challenger spirit Ryanair will continue to grow at pace.

“We like being a challenger and a bit of a bad boy in the industry, but not bad to customers,” he adds with a smile.

“We’re one of those brands that gets away with saying crazy things and even though we’re the biggest airline in Europe we want to feel like a startup. We’re not afraid to speak our mind and I think people appreciate that.”