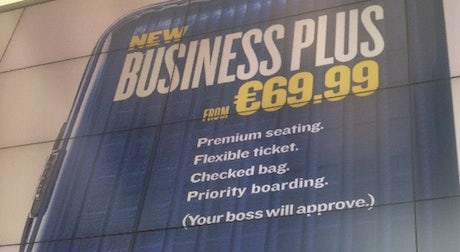 Launching on TV on Monday (1 September), the ads will communicate the new proposition to business travellers and introduce the strapline “Business. Made Simple”. The campaign, created by Dare, will also run across press and regional radio as well as on digital by retargeting key websites, such as business publications, in nine European countries including the UK.

The new “Business plus” fares will be available on all flights with prices starting from £59.99. Speaking to Marketing Week, Ryanair’s chief marketing officer Kenny Jacobs says the service will be “straightforward” offering business travellers “great value on the things that matter to them”.

This includes flexible tickets, with passengers able to change their ticket free of charge up to one hour before departure, fast-track through airport security, an increased baggage allowance of 20kgs and priority boarding.

There will also be access to “premium seating”, which Ryanair describes as seats at the back or front of the plane or the emergency seats located over the wings. However, Ryanair currently has no plans to introduce a “business section” on its planes, with Jacobs saying the seats will not be “physically different”, there will be no curtain to separate areas and business passengers won’t get free food or drink.

“We asked our customers and they said that’s not important. We may add in services in future but for now we have focused on what customers want from a low cost business fare,” he says.

The launch of a business service is the latest attempt by Ryanair to attract more corporate customers, which already account for around a quarter of the airline’s traffic. Ryanair has already made it easier for businesses to book by making its flights available on GDS networks and introduced more flights on key business routes and to primary airports to help people “get business done in a day”.

Jacobs says Ryanair has put a “significant investment” into communicating that it is “open for business” and will be hoping to see an uptick in business bookings and its share of the business market.

Ryanair is also planning a new campaign to talk about its “every day low fares”. Launching today (17 August) in print, Jacobs says it will work “like a retail ad” and highlight that Ryanair has fares that start at £19.99, similar to the price of two cinema tickets.

The campaign will also air on TV with a 10-second spot that aims to promote its price point, routes and new simpler booking, as well as outdoor and in digital.

Jacobs claims Ryanair is winning passengers and market share in the UK and has plans to expand having announced new routes from Stansted for next summer. It is also planning to bid for Cyprus Airlines to give it greater reach in Eastern Europe.