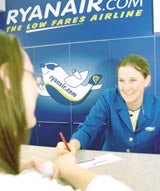 The move brings the low-cost airline in competition with a credit card from easyGroup, parent of rival carrier easyJet. EasyGroup launched easyMoney.com in July 2001 (MW May 24, 2001).

Ryanair, which has just bought rival low-cost carrier Buzz, is launching its credit card in partnership with MBNA Europe.

The new product is called the Ryanair.Com MBNA card and will offer users a free flight on any Ryanair route when it is first used. The card allows a further free flight after ten flights have been booked and paid for within a one-year period. The business will be overseen by Ryanair.com commercial director Conal Henry.

The company has brand extensions in the form of Ryanair Telecom and Ryanair Hotels.com. It also offers online financial services.

A spokeswoman says the initiative is designed to boost revenues through the internet. The company will promote the product on its website, by e-mailing customers on its database and by distributing flyers at airports.