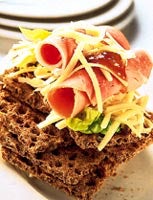 The Ryvita Company’s UK sales and marketing director, Debbie Wyatt, has quit after less than nine months in the role.

It is unclear whether Wyatt, who was appointed to the top UK marketing position in January, has a job to go to.

No one at Ryvita was available for comment on Wyatt’s departure as Marketing Week went to press.

Wyatt will be succeeded by export sales and marketing director Philippe Seurre, who will assume responsibility for the UK alongside his other duties.

Wyatt, a former consumer development manager at Glanbia Foods, oversaw the recent campaign to rebrand rye crispbread Ryvita as a general health product rather than a food for slimmers.

Wyatt’s predecessor, Chris Sebire, left the company in November last year to launch an on-

Mobile phone giant Vodafone is conducting a secret review of its European advertising arrangements which could result in an account worth up to £50m being handed to the successful agency network. The company is poised to appoint one network to create a consistent brand message in several key European markets. The new advertising is likely […]

The Daily Telegraph has been given a major facelift, designed to give it a sharper, cleaner look. The new-look paper will appear on Monday, with new columnists on the comment pages, additional space for sport on the back page, increased weather coverage and extended radio listings. New fonts and bolder, left-aligned headlines will be introduced, […]

Procter & Gamble-owned petfood business Iams is ploughing up to £5m into relaunching its Eukanuba premium dogfood brand across Europe.