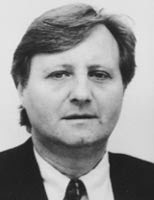 Seurre has held the role since September 2000. He took over from Debbie Wyatt, who left the company after less than nine months in the role (MW September 7, 2000). Before that, he was the company’s export sales and marketing director.

The move comes as Ryvita steps up its marketing and new product development activity. In May, the company launched a range of rice cakes backed by a &£1m marketing spend (MW May 16), marking the first time that the crispbread maker has extended its brand to other products.

Earlier this year, Seurre appointed Walsh Trott Chick Smith to handle its &£1.5m advertising business, following a three-way pitch (MW May 16). The TV advertising, which broke last month, moves the brand away from its slimming heritage to stressing its healthy nature. Previously the company used Publicis, but the agency was dropped from the account because Ryvita felt that there was increasing conflict with Publicis’ work for McVitie’s Go Ahead brand.