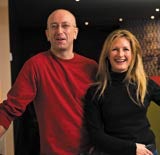 Saatchi &amp; Saatchi has launched a consumer advertising campaign to reinforce the agency’s status in the eyes of the public. The move follows the recent management restructure, after the agency brought in fresh blood in the past six months.

The agency started its campaign with a radio campaign yesterday (Tuesday) on Capital and Heart FM and plans to take out newspaper advertising in suitable publications.

The three radio ads build on the agency’s long-standing slogan “Nothing is impossible” and feature individuals trying to improve their driving, golf and drumming. The sign-off line is “What are you going to achieve this year? Saatchi &amp; Saatchi – nothing is impossible.”