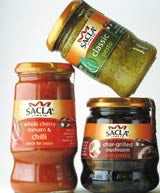 Sacla, the pasta sauce brand, has appointed Banc to handle its &£3m advertising account. The agency is understood to have won the business after a competitive pitch against a number of undisclosed agencies.

Banc is working on the brand’s positioning and communications strategy. It is understood that this will be implemented on a global basis. The brand was forced to review its account after its previous agency, Mitchell Patterson Grime Mitchell, closed in April. The pitch was overseen by managing director Clare Blanpied as the brand does not have a dedicated marketing director.

In the past, Sacla has primarily focused on below-the-line work and sampling campaigns in its efforts to raise brand awareness. It has also launched a number of new products, such as coriander pesto, and relaunched its range of risotto sauces. It has revamped its packaging and incorporated the word “Italia” into its logo to reinforce its authenticity.

The Sacla brand is still considered to be a niche brand in the wet pasta sauce sector, which is dominated by Knorr Ragu, Dolmio and Bertolli. It has had significant success in the pesto market and has a variety of flavours, including coriander and pesto alla Genovese.