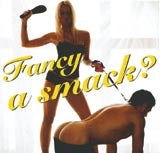 The Advertising Standards Authority (ASA) has banned a “sado-masochistic” leaflet for a gym from being distributed to commuters.

The leaflet for Gymbox, which was designed by Gymbox and its agency Explosive, depicts a woman in high heels and a corset holding a lead attached to a collar round the neck of a man on his hands and knees with his trousers down. It has the slogan “Fancy a smack?” The ASA said the leaflet, designed to encourage women to take up boxing at the central London gym, was likely to cause offence and was unsuitable for distribution.

The authority released its annual report this week. It showed that non-broadcast complaints fell slightly to 12,711 in 2004, although the internet became the fourth most complained about non-broadcast media, leapfrogging magazine ads.

The report was the first since the ASA was given responsibility for broadcast advertising by Ofcom. It is understood that the ASA is considering launching a campaign to explain its new services to consumers.

Channel 4’s E4’s launch as a free-to-air channel on Freeview is being brought forward to coincide with the start of the sixth series of Big Brother in May. Media buyers are expecting the entertainment channel will have an impact on ITV2, which is already available on Freeview, because it will reach a further 4.5 million […]

Unilever’s Swedish ice cream subsidiary, GB Glace, has come under fire from local race relations activists and anti-Nazi groups over two of its products. Swedish civil rights lobby group the Centre Against Racism (CAR) has attacked GB Glace for a marketing campaign supporting its new Nogger Black lolly. The product is a variant of the […]

The Broadcasters’ Audience Research Board (BARB), the television rating organisation, has joined up with radio audience measurement body Rajar to test the Arbitron portable meter device. It is the first time that BARB has been involved with the Rajar testing of electronic meters. BARB has arranged for the encoding of a small number of TV […]