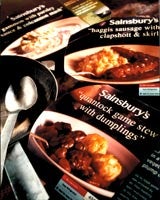 Two of the UK’s leading supermarkets are showing their support for the country’s farmers in the wake of the foot-and-mouth crisis by launching ranges of traditional British dishes.

This week, Safeway is relaunching its line of Traditional British chilled ready meals, such as shepherd’s pie, cottage pie and beef casserole. The packaging will be redesigned in warm colours and all items in the range will carry the strapline “hearty and warming”.

The supermarket chain is also adding a complementary range of vegetables, sauces and desserts.

At the same time rival supermarket chain Sainsbury’s is launching a selection of regional dishes, based on traditional recipes from England, Scotland, Wales and Ireland.

The range, which is being launched as part of Sainsbury’s month-long British Celebration, will sit alongside the grocer’s existing ready meals and the packaging will feature information about the region where the recipe originates from.

A TV advertising campaign, created by Abbott Mead Vickers.BBDO and featuring celebrity chef Jamie Oliver, will break on October 17 to promote the new range. Media buying is through PHD.

A Sainsbury’s spokesperson says: “Now is a good time to show support for British farmers and British food.”

As part of the British Celebration, Sainsbury’s will also run a number of special offers on British produce, such as meat, cheese and jams until mid-November.