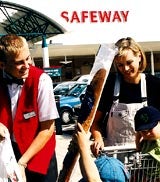 Safeway is looking for an advertising agency outside its existing agency roster of Bates UK and 141 to work on a special project.

The move threatens the seven-year association Bates UK has had with the retailer. Bates is known for creating the “Harry and Molly” TV campaign for Safeway, which has since turned its back on the medium.

Despite recent reports that Safeway is thinking of returning to television, a spokeswoman for the supermarket says: “In line with our local marketing strategy we have no intention of doing TV advertising.”

The move is the second blow to Bates’ parent company Cordiant, after the Bates US agency lost its $160m Hyundai Motor America business after 16 years. Cordiant’s share price dropped when Hyundai announced the decision on Monday. Bates had already lost the media work at the end of last year.