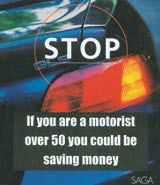 Michael Cutbill, marketing director of Saga’s financial services division, is leaving the company at the end of March. He has been working out his notice since the &£1.35bn management buy-out (MBO) of the over-50s travel and financial services group in October last year (MW October 7, 2004).

Cutbill declines to comment on whether he received any money from the sale, but confirms that he plans to “spend a bit of time not working as flat out as I have been” before looking for another job.

It is understood that Cutbill’s deputy, Amanda Hoskins, will fill his role temporarily until the company recruits a replacement.

Cutbill joined Saga in 1999 from Freemans, where he was director of marketing.

Saga was founded in 1951 by Sidney de Haan as a single hotel in Folkestone targeting the over-50s, and grew to encompass financial services, travel and holiday products and media interests including a magazine and a radio station. It was his son Richard de Haan who sold the company to the MBO, led by chief executive Andrew Goodsell and backed by private equity firm Charterhouse.

Saga spent &£3.7m on advertising its financial products during 2004, according to Nielsen Media Research. It uses Mediaedge:CIA and Outrider.