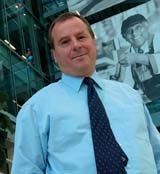 Sainsbury’s Bank chief executive Tim Pile has left the company suddenly without a job to go to. He is believed to be carrying the can for “bleak” financial results a week ahead of the end of the bank’s financial year.

Insiders say the former Alliance &amp; Leicester marketing director is taking the fall for continued bad results at the bank, which is joint-owned by the supermarket and banking giant HBOS. The bank recorded a &£5m loss in the first half of the financial year, and is expected to post similarly woeful figures for the six months to the year ending March 29. Preliminary results for the year will be announced in May.

A spokeswoman for the supermarket insists the decision is mutual, although it is understood that Pile was asked to step down late on Monday night. A statement issued by Sainsbury’s says Pile “has agreed to step down from his role with immediate effect”. He is believed to have pocketed a year’s salary and has already begun his 12 months’ gardening leave.

Pile was appointed as chief executive in January 2002 when the bank, which launched in 1997 and generated its first profit in 1999, was believed to be Sainsbury’s star performer. Both Tesco and Asda’s financial services arms are bigger, but have been similarly affected by a rise in bad debts.

The picture is said to look particularly bleak in the light of the supermarket’s fortunes beginning to turn, spurred on by its “Try Something New Today” strategy, fronted by celebrity chef Jamie Oliver.

The bank aims to capitalise on the supermarket’s new-found momentum, revealing last month plans to drop its “Fresh Banking” strapline and align itself more closely with the main Sainsbury’s brand (MW February 26).