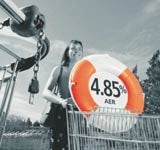 Sainsbury’s Bank has positioned itself aggressively in the direct savings account war by increasing its interest rate to five per cent for its Direct Saver account.

The new rate will be promoted with press and internet advertising, accompanied by leaflets distributed in stores.

Cahoot, the online bank owned by Abbey, is promoting its savings account with a rate of 5.5 per cent guaranteed for 12 months, and Alliance &amp; Leicester’s online savings account offers 5.1 per cent.

ING Direct, which revolutionised the savings market when it entered the UK last year, has countered Sainsbury’s move by increasing its rate to 4.85 per cent this week.

In February, Halifax launched its Regular Saver account, supported with television advertising by Delaney Lund Knox Warren featuring its popular Howard character. It offers a rate of six per cent but has conditions including a minimum regular contribution. Sainsbury’s Bank is a joint venture between the supermarket and Halifax Bank of Scotland.

Tesco Personal Finance has an instant savings account, but it has a top interest rate of 4.5 per cent only available for balances of more than &£50,000.