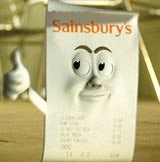 Sainsbury’s Bank is the latest financial company to reach for an icon that will connect with consumers, as Direct Line’s red telephone has done, in a bid to sell its services. The animated icon, called Little Bill, has been created to breathe life into the bank and enable it to gain ground on rival Tesco.

Tesco is about to launch a &£15m car insurance marketing drive. But in contrast to Sainsbury’s Bank, Tesco Personal Finance will offer car insurance money-off vouchers at checkouts, rather than what it has dubbed “marketing fluff”.

Little Bill is an animated supermarket till receipt, and will be the star of an advertising blitz for Sainsbury’s Bank – its first national television push – that launched this week. Little Bill was created by ad agency Walsh Trott Chick Smith and promotes a low-price pledge. He may be used later for Sainsbury’s Bank branding and services.

Insiders say the brief was to create an icon that would stand out against other insurers’ icons, such as Direct Line’s red telephone, More Than’s dog Lucky and Churchill’s “nodding dog”. Last month Esure rebranded, ditching Michael Winner from its advertising in favour of an animated mouse (MW May 26).

Paul Gordon, joint managing director of financial services advertising agency cchm:ping expects the popularity of icons in the finance sector will continue. “The right icon can really help in the intangible world of financial services. It can make products and services more tangible,” he says.

But he warns against complacency, citing Scottish Widows as an example. People were so used to seeing the “widow” icon, he says, they assumed they had already heard the “message” and mentally switched off. And not all successful campaigns draw on an icon. Gordon cites Norwich Union and its “quote me happy” campaign as an example of a successful icon-free advertising strategy.

Walsh Trott Chick Smith marketing director Will Hamilton explains the rationale of having an icon: “Insurance is a high-margin but low consumer-interest category. There’s so much advertising in the sector that icons have become prevalent to help stand-out.”

Sainsbury’s Bank (a 55:45 joint venture with HBOS), has more than 2 million customer accounts, and is growing by a third each year. But it still lags behind Tesco Personal Finance (a 50:50 joint venture with Royal Bank of Scotland), which has 5 million customer accounts, including more than 1 million car insurance policies. Asda and Wm Morrison have also recently entered the financial services arena.

Two years ago, Tesco Personal Finance turned to talking trolleys in its advertising, but now it allies itself and its advertising closely to the parent brand.

“We’re not into icons,” says Tesco Personal Finance marketing director Crawford Davidson. “Tesco doesn’t like to go in for ‘marketing fluff’. I go by what customers say.” Instead the group will continue with the Tesco “Every Little Helps” philosophy. Its in-store marketing drive to drum up car insurance business starts next week. Customers spending &£25 or more in store will be given a &£50 money-off voucher. “A lot of financial services have gone for the icon for memorability. But when you have as many stores as we have, that memorability is already there,” he says.

Yet as Sainsbury’s Bank director of insurance Jonathan Hewitt says: “Competition in the car insurance market has never been greater.” He adds: “I don’t think our latest marketing campaign is fluff. It’s about the message and communicating that message. It’s easier for an icon to speak than for any other form of imagery.”