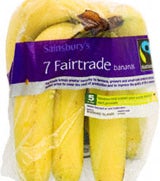 The supermarket says that one in every four pounds spent on Fairtrade products in the UK is spent at Sainsbury’s and adds that annual sales of Fairtrade increased by 10% to £218m compared to this time last year.

Fairtrade Fortnight is an annual campaign run by the Fairtrade Foundation to encourage consumers to swap everyday products with Fairtrade counterparts. The campaign runs from 22 February.

The Fairtrade Foundation is ramping up its digital efforts for this year’s “Big Swap” campaign.

Other brands leading a marketing push around Fairtrade include Starbucks and Bull Dog. Starbucks has launched an outdoor and digital campaign promoting that 100% of its coffee is now Fairtrade and Bull Dog, the male grooming brand launched a Fairtrade range of natural skincare products for men yesterday (15 February.

Sainsbury’s sells more than 800 Fairtrade products and has converted to sell only Fairtrade bananas, and all its own-brand coffee and sugar is Fairtrade as well as 85% of its own-brand tea.

Sainsbury’s customer director, Gwyn Burr, said: “Despite the current focus on price and great value, shoppers clearly want to know that producers are getting a fair deal too. We believe that Fairtrade is a great way to provide customers with the best of both worlds – ethically sourced products at affordable prices.”