Sainsbury’s is encouraging viewers to make this Christmas one “to savour” in its festive ad, following the lockdown disruption of last year.

Created by Wieden+Kennedy London, the 60-second film immerses viewers in a single snapshot of a traditional Christmas dinner, travelling through the scene to allow viewers to see every detail. Etta James’s song ‘At Last’ plays throughout.

Opening with someone plugging in Christmas tree lights, the words ‘Welcome Back to Christmas’ appear onscreen in Sainsbury’s recognisable brand colour and font. Everyone in the scene freezes, with an excited dog left in mid-air, grandmother and grandchildren frozen playing a drag queen themed game of ‘Who Am I?’, and a woman opening a bottle of Sainsbury’s prosecco.

After panning over all family members as well as a table full of Christmas food, the camera zooms out and the scene resumes. The title of the ad, ‘A Christmas to Savour’, appears onscreen as actor and presenter Stephen Fry says: “It’s been a long time coming, so let’s make it a Christmas to savour”.

The ad airs for the first time today (14 November) on ITV during the Angela Black Special break. It launches in cinema on 22 November, with a 20-second cut also shown across TV and on social.

“With so many of us unable to spend Christmas with our loved ones last year we, along with the nation, are really excited to fully celebrate Christmas once more,” says Radha Davies, director of brand communications and creative at Sainsbury’s.

“One of the true highlights of the festive season is the much-anticipated Christmas dinner. While the food is important, it’s also about what that meal represents, spending quality time with loved ones, catching up, enjoying a delicious meal and above all, having fun together.

“That’s why we decided to focus on savouring every moment with this year’s ad. We really hope everyone truly gets to enjoy themselves this year and can make it one to remember.”

Earlier this month, Sainsbury’s reported an underlying profit before tax of £371m for the 28 weeks to 18 September, a 23% increase on the first half of last year.

Digital has played an important role, with the the group maintaining an increased level of digital sales after consumer behaviour changed during the Covid-19 pandemic.

Some 39% of the supermarket’s retail sales were digital during the first half, accounting for income of £5.8bn. As a result the retailer has increased its focus on digital marketing messages, according to Sainsbury’s chief executive Simon Roberts. 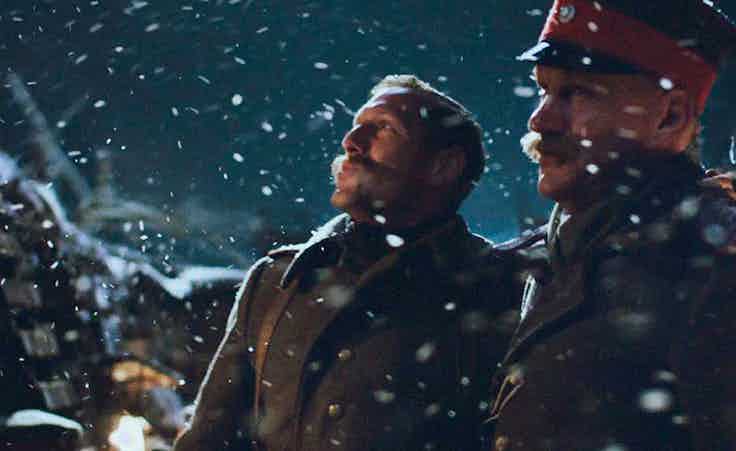 Sainsbury’s head of brand Mark Given says the supermarket’s hopes to prove it understands its customers by showing that Christmas is about more than just food and drink with its World War I-themed festive campaign.