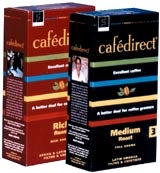 Sainsbury’s is launching a range of own-label fair-trade products to compete with branded ranges such as Oxfam and Cafédirect.

The range, which goes on sale in 383 Sainsbury’s stores this week, will include coffee, tea, chocolate and drinking chocolate, all of which will be introduced by March next year. It has been developed in collaboration with the Fairtrade Foundation, an organisation set up to guarantee a better deal for third world producers. The products will carry both the Sainsbury’s and Fairtrade Foundation logos.

A spokeswoman for Sainsbury’s says the new range will be priced at a “premium” level, in line with other fair-trade lines stocked by the supermarket. She adds that no advertising is planned for the own-label products at the moment but this may change at a later stage.

Cafédirect managing director Penny Newman says the company welcomes the supermarket’s move as it will bring greater awareness of fair trade to consumers. She adds: “It will complement our own work in expanding the fair-trade market.”

Sainsbury’s socially responsible sourcing manager, Liz Fullelove, says: “We began selling fair-trade products in 1994 and were the first UK supermarket to do so”.