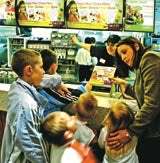 Sainsbury’s marketer Dominic Rowell has been appointed as head of marketing at McDonald’s. His appointment follows the promotion of Laurie Morgan to vice-president of marketing earlier this year.

It is understood Rowell has been debating whether to leave the supermarket for some time, but instead of going earlier this year, he switched from head of national advertising to head of loyalty and direct marketing after Jonathan Lathem left in March.

His departure, which has been confirmed by Sainsbury’s, comes just months after the retailer completed a review of its £56m advertising business. The supermarket reappointed Abbott Mead Vickers.BBDO after  a final contest with JWT.

A spokeswoman for McDonald’s confirms the company is appointing a new head of marketing, but was not in a position to say who that would be or when it would take place as Marketing Week went to press.

Morgan was promoted after John Hawkes, the vice-president of marketing, retired. Rowell will work with Morgan to build the fast-food chain’s new focus on healthier menu items and advertising that promotes a balanced lifestyle. It has been developing this under the “It’s what I eat and what I do” banner (MW March 10).