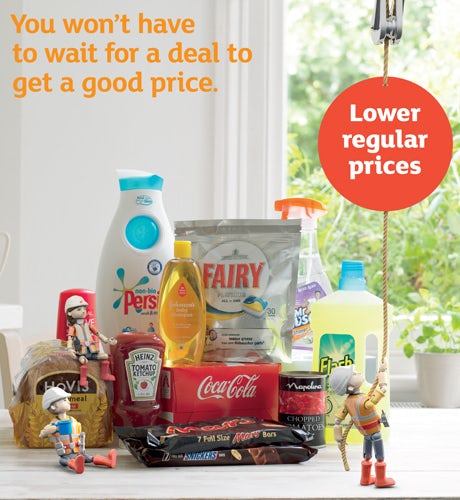 The campaign, which launches tomorrow (26 September), is formed of three parts. The first will focus on “clear and consistent” prices and “fairer” promotions that will price products at a real and fair price both before and after they go on promotion.

That is the result of 18 months of work by Sainsbury’s across its business to make prices easier to understand by using more round numbers. The campaign will draw attention to this work, as well as to the fact that rivals, such as Tesco, still employ what Sainsbury’s claims are confusing pricing tactics.

The second part is a change to Brand Match, Sainsbury’s price-matching scheme that will see it only compare prices to Asda because it is seen as the market leader on price. From 2 October, Sainsbury’s will introduce Asda’s green into its stores in order to hammer home the pricing point.

The third strand will continue Sainsbury’s focus on values by highlighting the sourcing and quality credentials of its own-label food.

Speaking to Marketing Week, Sainsbury’s marketing director Sarah Warby says the aim of the  three-pronged campaign is not to be provocative but to use rivals as a “benchmark” to tell a story about its journey towards fairer prices and promotions. She says its customers know Sainsbury’s is competitive on price, particularly against Tesco, but what surprises them is that more than half the time Sainsbury’s is cheaper than Asda for a branded shop.

“That’s the slight jaw-dropping moment because Asda is seen as the leader on price for a lot of customers. We’re changing Brand Match to simplify it and make it only against Asda because that’s the bit that floats customers’ boats. We have a really good news story for our customers that surprises them because it’s a different expectation, so why wouldn’t we draw that comparison deliberately? We aren’t setting out to poke anyone in the eye but sometimes you have to use a benchmark otherwise the story just gets really complicated,” she says.

Warby admits using Asda green is “quite a big deal” but says she doesn’t expect it to provoke much of a reaction from Asda, beyond the “normal day-to-day competition that we already have”.

Nevertheless this is a shift for Sainsbury’s, moving the dial from all-out focusing on values to speaking more about price and promotions. Sainsbury’s has been talking about price, but in tactical print ads rather than as part of a wider brand campaign.

“We are going heavier on a price promise, rather than price, and resetting the way we talk about price. Everyone has a slightly different definition of what good values means and it’s a combination of price, quality and values, plus the service you experience in store, the convenience. My job is to move the graphic equalizer up and down,” says Warby.

Asda tactics have been attracting interest from rivals because of its relative success – the supermarket was the only one of the big 4 to enjoy sales growth in the 12 weeks to 14 September, according to latest Kantar data. Asda’s focus on “every day low prices” has been adopted by Morrisons, which uses the phrase in stores.

Sainsbury’s switch to a price-led focus is in line with Morrisons and Tesco, which have launched multi-million pound pushes to highlight their price cuts this year. It also comes six-months after its nine-year run of sales growth came to end and it reported a decline in same store sales in its last quarterly statement.

“We are communicating that our customers get fair prices, great value and the reassurance that when a product is not on promotion they won’t miss out because Brand Match mean it is still cheaper than Asda or they’ll get a promotion. Plus the bit that makes it special, the cherry on the top, is the values through our own-ranges,” she says.