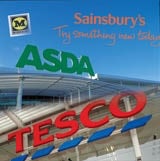 Sainsbury’s was the only Big Four supermarket to increase its market share over the 12 weeks to 26 December 2010, thanks to its more premium positioning and the relaunch of its Taste the Difference range. It now holds 16.6% compared to 16.3% a year ago.

Asda and Morrisons both reported a 0.1% fall in market share during the period, with Morrisons continuing the slide that first emerged last month following three years of positive gains.

Tesco’s share remained flat, despite pushing its Clubcard loyalty programme in the run up to Christmas.

Waitrose continued to outperform, increasing its market share to 4.2 from 4% the previous year.

Overall the sector enjoyed 5.1% growth during the period, driven by increased spending levels as shoppers opted to buy non-food items and gifts as part of their grocery shop rather than venturing out to high streets in bad weather.

Edward Garner, Kantar Worldpanel communications director, says : “Widespread disruption caused by the heavy snow before Christmas meant that many consumers only ventured outdoors for essential grocery shopping trips this year. Increased spending levels rather than shopper numbers were therefore the driving force behind the strong growth of the grocery sector this period.”