The marketing campaign will be driven by public relations and experiential sampling, and will aim to complement the brand’s sponsorship of the 10th annual British 10k London run, which will take place on 11 July and SportsAid, which helps the next generation of young British sportsmen and women from a grass roots level.

The campaign will also include direct trade activity and a television advertising campaign, as well as a number of sponsorships, tastings and promotional brand campaigns.

An online campaign utilising social networking sites, Facebook and Twitter is being used to document activity and interact with consumers.

Nevid Ahmed, marketing director for Saka, says; “Saka is well recognised and much loved brand, but up until now Saka’s reputation has been built on its quality and the great value of the product. We are now taking Saka to the next level by giving the brand the support that it deserves. Its balanced ph level is unique and one of the best in its sector and its something we believe that will really resonate with consumers. Saka’s purity of source, quality of water and natural mineral content are officially recognised by the SGS Fresenius Institute.”

Carlsberg is launching the final stage of its high-profile ‘Team Talk’ campaign, with a national radio and poster drive, which will break in early June and run throughout the World Cup. 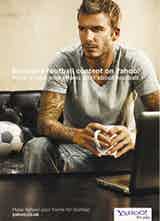 David Beckham has become the first ever global ambassador for the Yahoo!, the media company.

The BBC Trust has confirmed it’s looking to finalise its appraisal of Project Canvas within weeks.