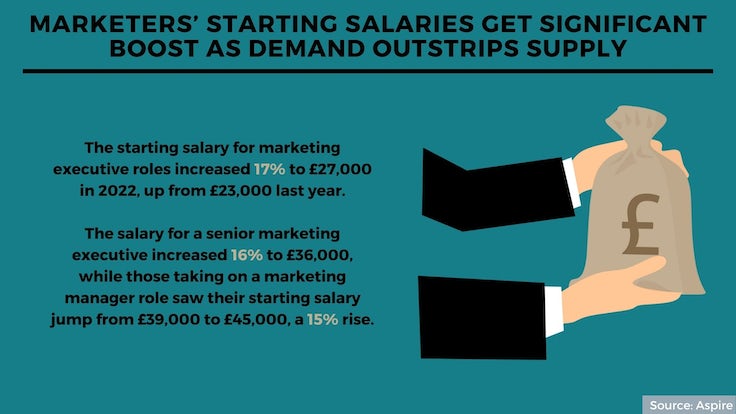 Marketers starting out in the industry have seen a pay boost of as much as 33% over the past year, fuelled by the “unprecedented” number of vacancies and a skills shortage. It means pay rises in marketing are far outstripping the rising cost of living.

The starting salary for marketing executive roles increased 17% to £27,000 in 2022, up from £23,000 last year, according to data from digital media and marketing recruiter Aspire shared exclusively with Marketing Week.

The salaries for more specialist marketing roles are also creeping up, with the starting salary for an SEO executive in 2022 up 14% to £25,000 compared to last year. The increase for an SEO manager jumped 17% to £35,000, while senior SEO managers can expect to get 13% more than last year, with a starting salary of £45,000.

“The record number of job vacancies and unprecedented demand for workers continue to have a very positive impact on starting salaries in the marketing industry, to the extent where, in some cases, pay is outstripping the rising cost of living considerably,” says Aspire founder and chairman, Paul Farrer.

“Major skills shortages mean employers are desperate for staff and enter bidding wars to recruit the talent they need. This has pushed up rates of pay further.”

As a result he says now is undoubtedly a “very good time to be working as a marketer”.

For more on marketing salaries take a look at Marketing Week’s Career and Salary Survey 2022. 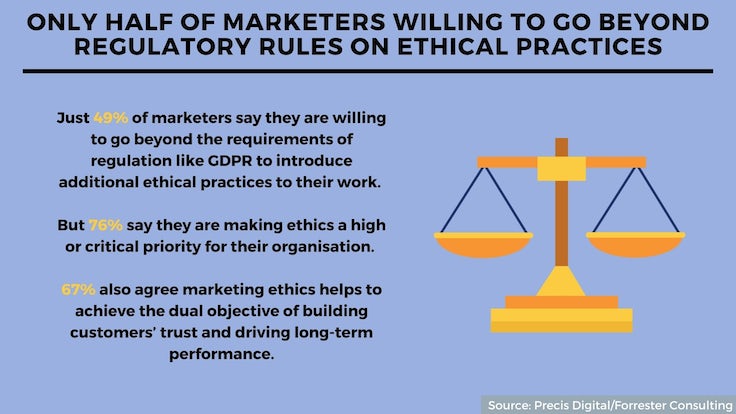 Just under half of marketers (49%) say they are willing to go beyond the requirements of regulation like GDPR to introduce additional ethical practices to their work.

Despite a general unwillingness to go beyond regulatory rules, the survey of 150 senior marketing professionals finds ethics are a priority for marketers. More than three-quarters of respondents (76%) say they are making ethics a high or critical priority for their organisation. More than two-thirds (67%) also agree marketing ethics helps to achieve the dual objective of building customers’ trust and driving long-term performance.

Brands should aim to go above and beyond regulation in their ethical stances, says Nic Travis, head of paid digital marketing at Lloyds Banking Group.

“The brands that will benefit in the long run are the ones that are more prudent around the level of consent they get, their transparency and the ones that can educate the users on the value that this consent brings,” says Travis, commenting on the research. “After all, when the regulation tightens, they will be better prepared for those changes.”

The research also finds the majority of marketers are prioritising customer satisfaction, 80% ranking it as the most important outcome of their marketing efforts.

Consumers perceive ads more positively when they are contextually targeted 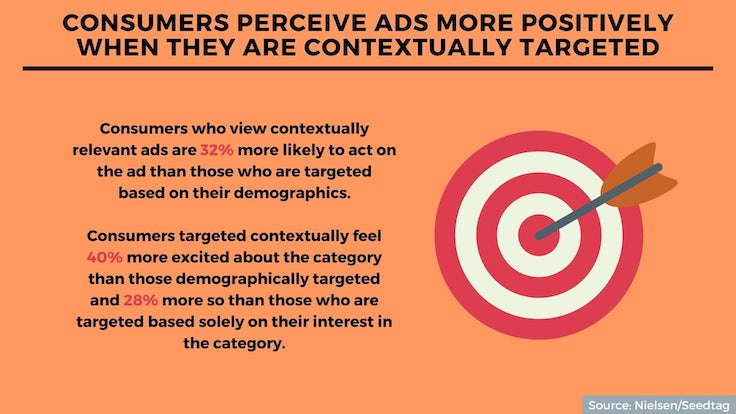 Consumers who view contextually relevant ads are 32% more likely to act on the ad than those who are targeted based on their demographics.

Contextually targeted consumers are also 2.5 times more interested in the category than when no targeting is employed.

The research, carried out by Nielsen and Seedtag, finds targeting consumers contextually based on things they are already interested in makes them feel more positive about the ad. Consumers targeted contextually feel 40% more excited about the category than those demographically targeted and 28% more so than those who are targeted based solely on their interest in the category.

Consumers targeted based on demographic or interest parameters also feel 60% more irritated on average, than those targeted contextually.

As well as driving increased interest in ads, the pitfall of stereotyping, which can be present in demographically targeted ads, are avoided through contextual targeting, the research suggests. For example, women might be targeted for beauty ads, but the research demonstrates at least 70% of the men that were contextually engaged will consider purchasing sustainable or organic/natural beauty products. 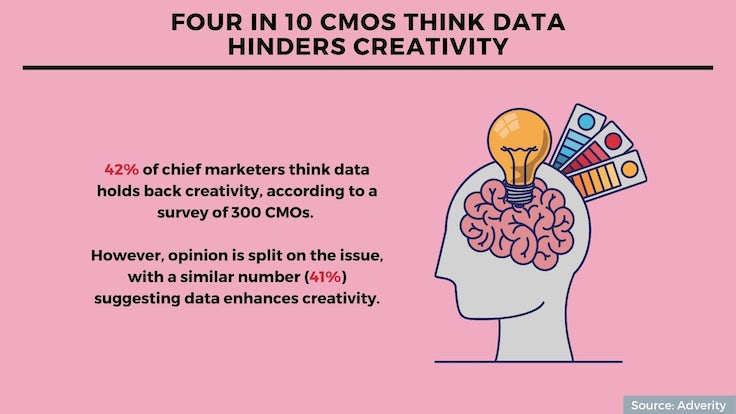 More than four in 10 (42%) of chief marketers think data holds back creativity, according to a survey of 300 CMOs. However, opinion is split on the issue, with a similar number (41%) suggesting data enhances creativity and another 17% unsure.

The research also suggests those who say data hinders creativity may struggle with the tools to utilise it effectively. Of those surveyed, 38% say not having the right tech to consistently deliver valuable insights from data is a hindrance.

The research also finds a significant number of marketing teams are not reviewing their data frequently. One in three (30%) marketing teams only review data once a quarter or less.

More marketers are seeing the need for a dedicated marketing operations role to manage martech stacks, the research finds. More than seven in 10 CMOs (73%) are committed to introducing this role to their team. Almost half (45%) already have someone in place in this role, while 17% are hiring for it. Just 12% of CMOs have had a marketing operations role in place for over a year.

Children’s exposure to TV ads for alcohol down 75% 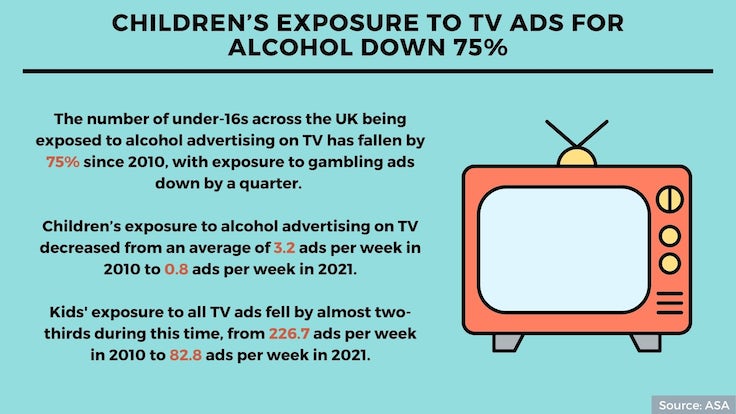 The number of under-16s across the UK being exposed to alcohol advertising on TV has fallen by 75% since 2010, with exposure to gambling ads down by a quarter.

According to the Advertising Standards Authority (ASA), between 2010 and 2021 children’s exposure to all TV ads fell by almost two-thirds, from 226.7 ads per week in 2010 to 82.8 ads per week in 2021. Children also saw fewer TV ads than adults, around one ad for every four seen by adults. 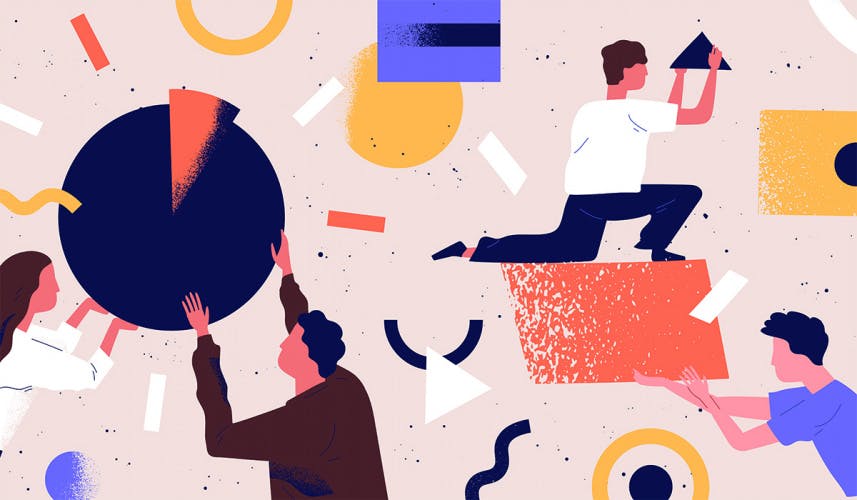 With only just over half of marketers convinced they are measuring ROI throughout the funnel, is the fragmentation of both customer data and media shaking confidence?