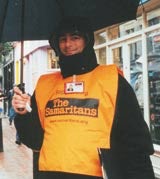 Counselling charity the Samaritans is increasing its presence in the aftermath of last week’s terrorist attacks.

The organisation has had a presence at Kings Cross station this week; and tomorrow (Thursday), a week after the bombings, it hopes to have volunteers at most of London Underground’s stations throughout the morning.

Samaritans has also asked its planning and buying agency MindShare to request space from media owners to publish the charity’s contact details. However, a spokeswoman says that so far only the Evening Standard has given the organisation space.

The charity is not launching a full-scale campaign, as it lacks the funds, but it says it wants to raise its profile in the wake of the attacks.

The charity often experiences a fall in the number of callers after major events, as it says the stigma associated with expressing emotion is broken down, but it wants to offer support to those affected by the attacks over the coming weeks and months.

It adds that events like those of last week can cause problems for people who have had similar experiences.

vThe Red Cross and Greater London Authority have launched a London Bombings Relief Charitable Fund for those affected by the attacks. So far almost £1m has been raised, mainly from corporate donations. The organisers say they are considering an appeal to the general public.