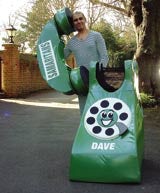 The Samaritans has teamed up with wireless solutions provider Wireless Information Network (WIN) to pilot its first mobile phone “text to donate” promotion, linked to this Sunday’s London Marathon.

A Samaritans fundraiser, called Dave, will compete in the race dressed as a computer to raise awareness of the e-mail service. Anyone who wants to sponsor him will be able to text the keyword “Dave” to the shortcode 88222, and &£3 will be billed to their phone bill and passed to the Samaritans. The donor will receive confirmation by SMS, thanking them for the donation and advising of other ways to donate. Dave has previously completed the marathon dressed as various things, including a cake and, last year, a phone.

Earlier this year, WIN hosted and managed a similar project for the Disasters Emergency Committee (DEC) following the Boxing Day tsunami, working with the major mobile operators. That appeal generated more than 700,000 text donations and raised more than &£1m in less than two months.

Jeremy Payne, director of fundraising and external affairs at Samaritans says: “We considered where the best opportunity lay for testing SMS as a fundraising tool. Sponsoring Dave seemed to be the most appropriate and fun way of using it. It gives supporters the opportunity to respond immediately and give support there and then on the day.”

The shortcode and keyword will be included on leaflets sent to existing Samaritans donors, as well as on Dave’s race kit.

easyMobile has said it is to launch in the Netherlands.

William Eccleshare, chairman and chief executive of Y&R Brands in Europe, Middle East and Africa, is to head BBDO Worldwide in the same region.