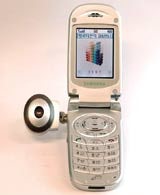 Samsung Mobile is seeking an agency to handle its £6m advertising account in the UK, just two months after the Korean electronics giant awarded its $770m (£412m) global advertising business to WPP Group.

The decision to hire an agency for the UK business follows the appointment of former Phones4U director of marketing Julian Neal as Samsung Mobile’s first head of marketing.

The company’s mobile division is believed to be talking to agencies about a forthcoming handset launch as it plans to increase its UK presence. The division does not have an incumbent. Samsung Mobile’s advertising is handled globally by Korea’s largest agency, Cheil Communications, which is part of the Samsung group. The global review did not affect Cheil’s work locally.

Prior to Neal’s appointment, marketing for Samsung’s mobile business was overseen by Mark Mitchison, general manager of its wireless division, and Eammon Collins, head of marketing communications for the brand.

WPP won the Samsung’s advertising business in November after a nine-month battle, as exclusively revealed in Marketing Week (November 18, 2004).

WPP, which pitched against Publicis and incumbent FCB, was appointed to handle advertising and media buying globally after WPP chief executive Sir Martin Sorrell is said to have intervened, tailoring a global network of WPP companies to provide Samsung with an integrated service worldwide (MW November 4, 2004).