The TV element of the multi-media campaign, created by Cheil, stars pop singer Lily Allen who soundtracks the spot with “As Long As I’ve Got You”. It launches tomorrow (20 September) with a 60-second primetime spot.

The campaign has been shot on location around England and aims to show the smartphone in natural settings of what it deems “Alpha Britons” – young people who “embody the spirit of new modern Britain and its stylish youth culture”, the company says.

The print, in-store and digital display parts of the push (see picture below) will feature real life “Alpha Britons” and will include statements such as “Shadwell Chic” and other references to their style.

Cheil says the campaign marks the first time it has created a brand platform for Samsung in the UK, one it says will influence the way Samsung devices are marketed in the future.

Russell Taylor, Samsung UK and Ireland vice president of corporate marketing, says: “The Galaxy Alpha is a smartphone that pushes the boundaries in terms of its style and technology and we wanted a campaign that was culturally relevant with young minded consumers.”

The Samsung Galaxy Alpha has been on sale since 12 September and has been given overwhelmingly positive reviews by technology blogs. However, it goes head to head in retail with the iPhone 6 and iPhone 6 Plus, which both went on sale today (19 September).

Samsung attempted to deflect attention from the high-profile Apple launch event last week with a series of guerrilla digital marketing tactics, including a video featuring Apple Store staff lookalikes emphatically cheering the fact that the iPhone 6 appeared to be very similar to other phablets available in the market.

Samsung just leads Apple in terms of market share in Great Britain. It had a 31.8 per cent share of the smartphones sold in the region in the three months to August, compared with Apple’s 27.1 per cent.

Samsung is currently on a journey to become “the most loved brand” in the UK, a mission that begain in February when it launched a brand marketing platform dubbed “Launching People” that saw it create a TV show where stars mentored undiscovered talent. 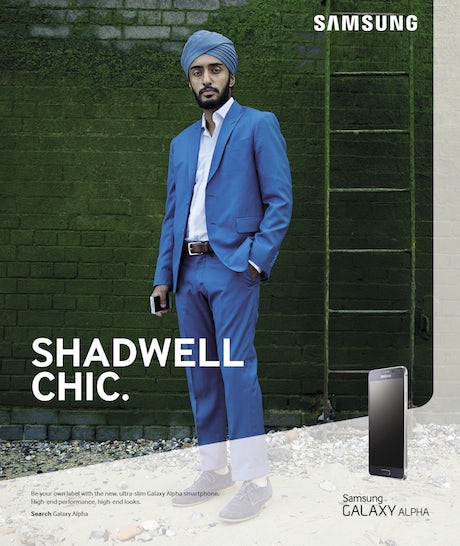