Samsung joined the race for 5G at Mobile World Congress in Barcelona today (26 February) unveiling the launch of a commercial 5G network of products in early 2018, with UK trials starting this summer.

It includes a 5G ‘radio base station’ and a home router that consumers can install themselves. Samsung’s chief executive, Tim Baxter, said its products would remove “the pain of expensive and time consuming fibre installations and instead network operators can provide super fast internet to homes and offices quickly and easily”.

He said that “5G will be massive” and will connect “everybody and every thing”. He added: “Think of hundreds of connected devices in the home, millions of smart sensors in cities – we are convinced that 5G is the next revolution and it all starts with the network.”

Samsung has already set up regional trials of the products in markets such as the US, Korea and Japan. It joins a number of brands that are partnering with US-based telecoms company Verizon for a 5G project.

READ MORE: Nokia makes big moves into 5G and wearables as it looks to shake off past

Speaking as a special guest at the press conference, Roger Gurnani, chief information and technology officer at Verizon, said: “Thousands of customers have already reached out to participate in the trails and we will start getting these customers on board in the next 60 days [and] there will be tremendous learning in in the next few months.”

Gurnani added that 5G is not just about fixed wireless to homes, offices and shopping centres but told the audience that schools will be part of the trial to test education tools powered by virtual realty, as well as next generation entertainment venues such as virtual golf courses and amusement parks. “It’s going to be a great summer,” he said.

The next virtual reality push 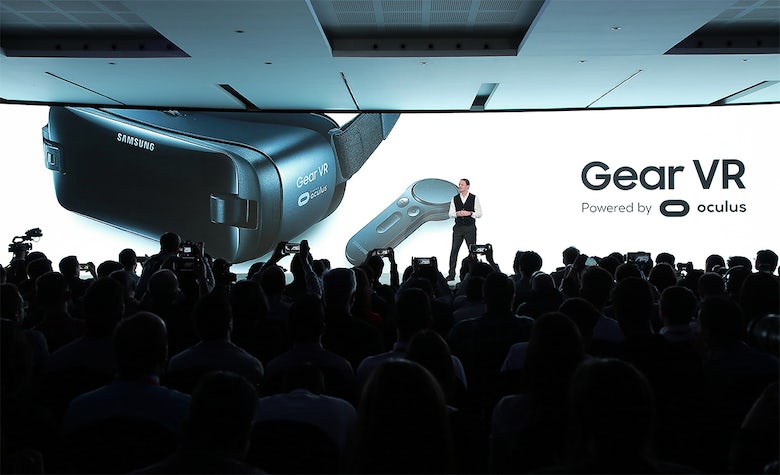 Not stopping at 5G, Samsung also launched two new tablets at the show – the Galaxy Tab S3 for entertainment and Galaxy Book for professionals. While the audience started to chat among themselves at the showcase of the tablets, it was the brand’s next VR products that got cheers and applause from the crowd.

The new Samsung Gear VR will feature a controller, powered by Oculus, that will act as a remote and touchpad tracking hand motions and opening up new ways to interact in mobile VR.

The touchpad enables selection and interaction in VR apps, including the ability to point, drag and drop, tilt, shoot, and a ‘trigger’ allows for enhanced gaming experiences. The controller will also feature a home, volume and back keys to users can have an uninterrupted VR experience.

The conference concluded with an announcement about Samsung’s next phone, the S8, but the big reveal will be at a later date. David Lowes, CMO of Samsung Electronics Europe, said: “We have illustrated tonight how we push boundaries to create better products, services and experiences and soon we will show you how we have pushed the boundaries even further to create innovation of a kind this industry hasn’t seen in a very long time.”

The brand announced “an important date” with the words Galaxy Unpacked, that invited viewers to ‘unbox your phone’ on 29 March.

A clear apology for its “most challenging” period

This year’s conference didn’t disappoint the crowd in terms of 5G, VR and a mystery product but it was noticeably more low key than previous events following the hit to Samsung’s brand reputation after a series of faults in 2016, including its Note 7 devices exploding.

The event kicked off with an apology this year, in contrast to the buzz of last year’s announcements that included a special appearance from Mark Zuckerberg.

Lowes lead the apology, saying: “Before we show you what’s coming next, we want to take a moment to reflect. The past six months has undoubtedly been one of the most challenging periods in our history, we did not meet the high standards of quality and excellence we set for ourselves and that consumers have come to expect from us.

“We are determined to learn every possible lesson and we recognise that regaining consumer trust can only be gained by actions not words. Following internal and third party led investigations we have implemented a broad range of processes to further enhance product safety.”

READ MORE: Samsung’s profits have recovered but has the brand?

The CMO went on to say this includes additional protocols, such as multi-layer safety measures and a new eight-point battery safety check. The brand has also formed a battery advisory group comprised of external advisors, academics and research experts with the aim of maintaining a clear and objective perspective on battery safety and innovation.

This is “not only for our benefit but for the benefit for the industry as a whole”, Lowes said.

He concluded by stating the brand is “encouraged by the positive response of customers to the actions” its taken and thanked “current customers who stayed loyal to Samsung”.

Lowes said: “Your continued support is a testament to the strength and resilience of the Samsung brand and at the heart of this strengths and resilience is our willingness to push the boundaries to deliver incredible products and services to our customers.”