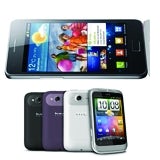 The Taiwanese company did not comment further on the results but had said in October it had expected to report weaker numbers due to “uncertainties from new models”.

HTC, which was one of the first manufacturers to adopt the Android operating system across its range and marked several quarters of consistent revenue growth, has come under increasing competition in recent months from rivals that also run the Google-owned software on their high end handsets.

The company overtook Apple as the world’s biggest selling smartphone maker last year, boosted by the launch of its Galaxy S2 handset, which has been backed by a major marketing campaign and earned the plaudits of technology commentators.

Samsung says it recorded its best ever sales of smartphones in the three month period to December.

Abel replaces Batyr Bulat who left in March last year “for personal reasons”, and will be responsible for the marketing and go-to-market strategy for all products within the mobile division. He will report to Simon Stanford, managing director of the UK and Ireland telecommunications division.

Read the cover feature to find out why embracing creativity will be your most powerful strategy in 2012 Senior vice-president of marketing at Unilever, Marc Mathieu, tells us about how the company embraces creative thinking What are the three constraints holding your business back creatively? Find out here Nicola Mendelsohn, Partner at Marketing Week’s agency […]