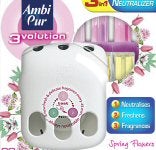 Sara Lee has extended its “air care” offering with the launch of a combined odour neutralizer and fragrance plug-in air freshener device under its Ambi Pur brand.

The innovation follows the roll-out of its 3volution plug-in device, backed by a £7m campaign in April last year. The company claims the new 3in1 Odor Neutralizer, which forms part of the 3volution range, is the first product to offer both an odour neutraliser and fragrance spray in one device.

The product will be available in all major supermarkets and independent retailers from the end of January, and come in two variants, Spring Gardens and Spring Flowers. The new seasonal fragrances will also be available across its range of standard electrical perfume plug-ins, rim blocks and scented candle products.

The product is designed to neutralise odours in the home while delivering three different fragrances regulated by an electric timer for continual refreshment.

The company plans to promote its latest product innovation with a series of magazine advertorials, competitions and activity around the Fragrance Challenge Roadshow encompassing 18 town centres across the UK from late January to May.

Ambi Pur has also signed up as the official fragrance sponsor for the Spring Ideal Home Show, which runs from March 9 to April 1, where the product will be showcased.

The 3volution range has been positioned as a “premium” offering in the UK’s air freshener market which has experienced rapid growth over the past 12 months driven largely by a strong performance in the electrical sector.

Vision Express, the UK optician chain is understood to have approached ad agencies to pitch for its £7m advertising account. Several agencies have received an e-mail from the retailer expressing interest in appointing and retaining a single agency – previously the Vision Express creative account was handled on a project basis. In May last year […]

Online travel brand Opodo is gearing up for a round of redundancies as part of a major restructure of its European operation. The Amadeus-owned travel company expects to conclude a formal consultation process with staff at the end of February, with a number of job losses expected within its central team. UK country manager and […]

Fallon has scooped the 45m Asda advertising account following a two-way pitch against incumbent Publicis. The decision will come as a major blow to Publicis, which has handled the business for 17 years.