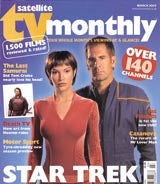 The May edition of the publication, which is the only monthly magazine for satellite and digital television schedules in the country, will be the last.

Highbury House, the publisher of Fast Car, Front and Real Homes, is undergoing a series of changes after it was bought by Future Publishing for £31.6m earlier this year (MW 17 February).

Paul Hirons, who has been the magazine’s editor for more than two years, will seek freelance employment after losing his job. Other staff have been relocated within the company.

Hirons says that the increasing number of free weekly listings supplements in newspapers and magazines and the growth of satellite listings in publications had squeezed the magazine’s market.