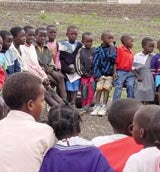 Scrimgeour, who will report to director general Mike Aaronson, has most recently worked as director of business development and corporate social responsibility for the European division of Y&R. She has also held a number of communications and marketing roles at Rowntree Mackintosh, Capital Radio and J Walter Thompson.

Scrimgeour joins on August 19, and until then Chris Taylor, the charity’s head of planning and resources, will cover the post.

Save the Children has been without a marketing director since early 2001 (MW March 5, 2001). The job became available after John Kingston, its marketing director of ten years, left to join the Charities Aid Foundation to be head of individual donor services. In October, despite the absence of a marketing director, the charity appointed Catalyst to its advertising, following a spell of handling advertising in house (MW October 25, 2001). Before that M&C Saatchi held the account.

Save the Children is the UK’s largest international children’s charity and operates in more than 70 countries. According to its 2000/01 UK annual report, it spent &£3.8m on information, campaigning and public awareness raising. It recently began testing a new look in two of its retail outlets in an effort to attract young people to the stores as volunteers and shoppers (MW May 30).