The £1.5m campaign attempts to highlight to consumers that there is more to the brand than just its antiseptic cream.

The ad hopes to engage mums by reassuring them Savlon’s full range of products can cope with the bumps and bruises that children pick up when playing outside.

The campaign uses the new strapline Savvy mums use Savlon.

Beattie McGuinness Bungay created the ad and believes the casting of children picked from schools in and around London has given the campaign a more natural approach.

The new work is the first time Savlon has used a UK-specific script.

The ad will break on 14 June and the campaign will run until the end of August. The ads will be shown on ITV, Channel 4, FIVE, GMTV and a number of Sky channels.

Now in its 3rd year, this year’s conference looks set to eclipse its predecessors as 31 brand leaders, media experts, analysts, economists, academics and technologists line-up to debate the key consumer and marketing trends that pose the most significant challenges, opportunities and threats to your business.

Apple has changed the terms of its application developer agreement to prevent apps from serving users with ads via the Google-owned AdMob network, prompting another round in the war of words between the US giants. 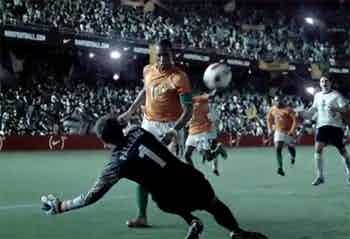 Nike has struck another blow in its battle with Adidas for off-pitch supremacy by creating a bigger online buzz about its World Cup marketing campaigns than its German rival.