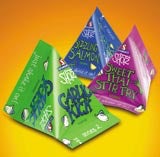 Herb and spice brand Schwartz is reviewing its advertising account out of Quiet Storm. It is understood that the brand is in the early stages of the review. The incumbent agency is not repitching.

Schwartz, which is owned by UK-based company McCormick, has not advertised since January last year when it launched Real Paste Cooking Sauces. It is understood to have spent just &£930,000 on advertising in 2004.

Quiet Storm was appointed to handle the account in 2002 after a four-way pitch. At the time, the company was thought to have boosted its marketing spend to &£5m as part of a move to exploit its brand equity and expand into new categories. Quiet Storm took the brand on to television for the first time in a bid to attract people who like cooking but want “quick fixes”.

Schwartz’s recent strategy has been to develop its brand awareness and drive sales through new product development. As well as its standard herbs and spices range, the brand has developed into spice mixes, such as curries, and seasoning for salads and stir-fries. It also has the Real Paste range, which can be used as a base for a variety of aromatic dishes.