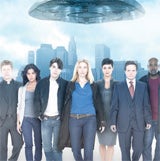 The rebrand is part of a global strategy to broaden its appeal and follows the channel’s name change in the US.

The channel wants to move away from being associated with exclusively “sci-fi” content and hopes that the name change will allow for a smoother move into genres such as fantasy, supernatural, reality, mystery, action and adventure programming.

The new name will come into play on 13 April and will coincide with the premiere of US alien invasion series V and action drama Human Target.

The channel will be redesigned and will use the new tagline “Imagine Greater”.

The channel is available on Sky, Virgin and TalkTalk pay-TV platforms.