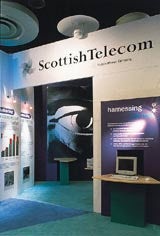 Scottish Telecom has parted company with its agency Faulds Advertising amid speculation that it may change its name and be floated on the stock market.

Faulds has handled Scottish Telecom’s creative and media accounts since 1994, but spend has dwindled – to under &£1m last year, according to AC Nielsen – as the company has concentrated on acquisitive growth.

Scottish Telecom is reorganising to concentrate on Internet, data and business clients. It is hiving off its telecoms businesses – it abandoned its radio-based telecoms service last month and is selling its joint-owned Martin Dawes mobile service operation, possibly to Vodafone.

The company may look for a new agency if the rebranding takes place.

Meanwhile, its Web subsidiary Demon Internet, acquired by Scottish Telecom in May 1998, has appointed Worth Communications to handle its &£4m account. The account moves from Abbott Mead Vickers. BBDO off-shoot The Open Agency.

A spokeswoman for Scottish Telecom confirmed the company’s advertising is under review but refused to say if an account would exist separately to the Demon Internet account.

Stephen Stewart was appointed director of sales and marketing in February after a stint as director of Scottish Telecom subsidiary The CallCentre Service. Former marketing director David Bull and ad manager Fi Harris have both left the company.

Ian Pay has stepped down from his post as chief executive of the free newspaper London Metro, and is to leave publisher Associated Newspapers after 18 years. Kevin Beatty, managing director of The Evening Standard, will take over the role as a member of the Associated board. Beatty will be supported by Mike Anderson, who […]

I read with interest your special report “People Power” (MW August 5). How refreshing to have an article in a marketing magazine that actually focuses on the people side of the job and the general apathy that faces marketing professionals who want to learn. It outlined the well-known conundrum – companies won’t invest in people […]

Retailing may be in the throes of globalisation fever, but domestic glory is all too often elusive away from home. Brand values have to be communicated carefully, and stay relevant.