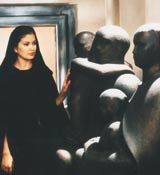 The review, which is being handled by the Haystack Group, is understood to cover branding work together with above- and below-the-line activity.

Scottish Widows, which is owned by Lloyds TSB, has been through significant management changes over the past year, including the appointment of Peter Jordan as marketing director in July.

This week, Scottish Widows has done a deal which will see its life insurance products being sold in Asda supermarkets, under the Asda brand.

Lloyds TSB bought Scottish Widows for &£7bn in 1999, with the intention of selling its savings products through the bank’s branch network. With a market share of 7.5 per cent, Scottish Widows lags behind market leaders Norwich Union and Standard Life, but its strong brand recognition, built through sustained advertising based around the “dark lady” character, has been seen as one of its strengths.

Last month, Lloyds TSB was forced to pay a fine and compensation totalling &£100m after the regulator found a Scottish Widows savings bond had been mis-sold.

Chelsea Village has appointed DTB as its sales and marketing agency with responsibility for selling matchday hospitality packages and the range of conference and banqueting facilities at Chelsea Village.

M2M has been appointed to handle the Â£5m media planning and buying account for pro-biotic drink Yakult.

Barclays has moved its Â£6.5m Barclaycard advertising account from BMP DDB to join the rest of the bank’s business at Bartle Bogle Hegarty.