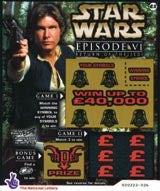 It is with some concern that I write this letter. While watching television recently, I was disturbed to see an ad for The National Lottery’s latest set of scratchcards – a Star Wars Episode III series. While I understand that Star Wars has multi-age appeal – with myself as a fan at the tender age of 34 – its primary target is surely children. I spent last weekend with my wife’s little brother, who is aged 13 and an avid Star Wars fan. He collects stickers, action figures and virtually anything that has an association with Star Wars. I’m sure, if he could, he would purchase these scratchcards too, especially as the cards themselves have a collectable look and feel.

I struggle to understand how and why this idea ever got off the ground and can’t fathom what the thinking was behind such an association. Rather than trying to encourage a nation of millionaires, The National Lottery seems to be encouraging a nation of under-age gamblers.

Star Wars is a story of good triumphing over evil. Let’s hope The National Lottery sees the error of its ways and resists the urge to cross over to the dark side of marketing. Or perhaps it could consider donating a share of its hard-earned profits to children’s gambling charities in the future.