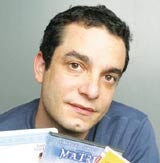 ScreenSelect.co.uk, the online DVD rental operation owned by VideoIsland, has linked up with Boots, Loot.com, Radio Times, RealNetworks and Virgin Megastores in its latest tranche of partnership deals.

ScreenSelect will be sponsoring radiotimes.com’s online film review section, and in a reciprocal deal will carry more than 24,000 Radio Times film reviews on its own website. BBC Worldwide business development manager Chris Kerwin says: “Film is an integral part of the Radio Times website, and this partnership with ScreenSelect will allow us to offer our 500,000 users access to more than 30,000 DVD titles.”

VideoIsland chief executive and founder Saul Klein says that such brand partnerships have been behind the online rental operation’s success. He adds that in 2004, partnership deals with large national brands allowed ScreenSelect to capture nearly four per cent of the entire UK DVD rental market.

As part of the deal with Virgin Megastores, ScreenSelect.co.uk will be promoted across the chain’s 170 outlets and also on the Virgin online site. RealNetworks will provide a special DVD rental service on its broadband entertainment portal, The Real Guide, while Loot.com is a pure marketing deal, promoting the core ScreenSelect service to its online and print customers.

Boots.com customers are being offered a special version of ScreenSelect, which allows them to take out two films at a time for a special price of £11.49 a month, compared with ScreenSelect’s usual £12.49, while acquiring Boots Advantage points.

VideoIsland rented nearly 3.5 million DVDs online during 2004, with more than 1 million in the fourth quarter alone. It claims to be shipping 500,000 titles a month in 2005.