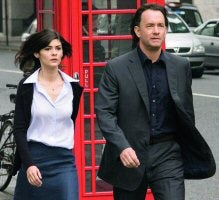 With the rise in creative internet content and services, and a growing number of global sports events and media channels, marketers keen to exploit sponsorship opportunities have more options than ever before. To add to the complexity, there are also all sorts of theories about what works, and about how important relevance is.

When opportunity content and brand values coincide, it can be a marketer’s dream. Consider Eurostar’s recent sponsorship of The Da Vinci Code film. Much of it is set in and around Paris and London, so who better to align itself with the movie than a London-Paris rail company seeking to boost its profile while basking in the subliminal romantic associations?

Complementary Gift
“The film and Eurostar were able to share advertising and other PR opportunities alluding to the romance, glamour and mysticism of visiting Paris,” says Rob Gray, managing partner at integrated communications agency Purity. “The target audience for both film and brand were similar, and the joint delivery meant the audience would consider seeing the film and going to Paris in the same thought.”

Eurostar has reported a substantial rise in sales during 2006, but what is particularly interesting is that the sponsorship relied heavily on the Net for its follow-through. Part of an integrated campaign developed by Space, the strategy involved an interactive “quest”, encouraging consumers to engage with online code-cracking challenges, to win holiday prizes.

“The prize offered was the biggest offered online, and the success rate was fantastic,” says Space managing partner David Atkinson. “The tie-in of the film with Eurostar’s two core destinations and brand values played a critical role.”

The success of this campaign shows the importance of finding a good fit between brand and sponsorship opportunity. This is further highlighted by a case of relatively ineffective sponsorship that could be attributed to a lack of subject relevance – Lexus’ sponsorship of a tour by Sir Paul McCartney. Not only was there little relevance, Lexus failed to consider that McCartney supports animal rights, which jarred with the use of leather in its cars.

Don’t Be Obvious
However, the link between a brand and its sponsorship activity need not be instantly apparent. MEC Sponsorship EMEA managing director, Jeremy Clark, gives this example: “When Specsavers was losing market share in Scotland, we identified football as a key connection point between the brand and the consumer,” he says. “Rather than wasting money competing with other shirt logos, we played on the humorous link between refs and eye tests by securing a deal with the Scottish Football Association to sponsor all Scottish match officials.

“Not only was the link absolutely watertight, but it also offered an innovative medium to reach the target audience. A viral campaign and £700,000 worth of PR helped boost sales by 22% immediately after the launch and gave Specsavers its all-time best sales figures.

“But even if no obvious link exists between the brand and an event that will reach your target audience, it is possible to create your own theme to link the two,” Clark says. “If executed well, this will allow you to ‘own’ the event, creating a powerful platform to communicate your brand identity. But the theme must be communicated perfectly to ensure that the consumers believe the link has integrity. For example, there is no palpable link between Norwich Union and athletics, but, by partnering with UK athletics and creating a series of sporting events for children, it has created a relevant link between the idea of ‘preparing future sports champions’ and ‘preparing for the future’. This is far more powerful than a logo on a Premiership footballer’s shirt could ever be.”

Rule of Engagement
“Sponsorship’s differentiator is that it creates engagement and relationships, and communicates with appropriate audiences, through their own passions and interests,” says Andy Collis, global client service director at MICE Group.

That’s why, when Cadbury decided to breathe new life into its Halls Mentholyptus brand, it aligned the product with the British Superbike Championship, which helped it address a new, hard-to-reach audience of 30to 45-year-old males.

It wanted TV exposure, but the budget was too low for an ad campaign. The sponsorship not only lent the brand a cool new image, but brought in a highly targeted audience of 3 million to 4 million (thanks to coverage on BBC and Sky). Cadbury spent just £350,000, but achieved a level of exposure that would have cost £3m in TV advertising.

Now that’s thinking outside of the box.