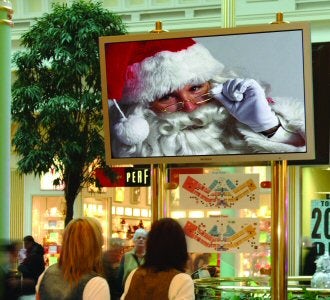 Christmas starts earlier, and gets more stressful, with each passing year, but sympathetic in-store messages can transform the experience – and stop the drift to online shopping.

At the risk of sounding Scrooge-like, it’s that time of year again. Except that that time of year now lasts a full quarter. While shopping in Sainsbury’s in a still-hot September, customers were being regaled with Christmas-related promotions, so it’s hard not to be a little cynical.

The piped jingles, the fake snow and the shabby Father Christmases are all with us again, and the retail frenzy – that carries over into the January sales – has begun in earnest, with piles of in-store messages reminding us, as if it were needed, that it’s Christmas time.

But does the massive increase in in-store point-of-purchase (PoP) material actually ease the shopping experience or just create a sense of being overwhelmed? Well, it seems that, as consumers, we are a little schizophrenic about how we feel when it comes to Christmas messages. Research shows that when there is little or no in-store Christmas-related “noise”, shoppers feel hard done by. On the other hand, the extraordinary increase in online Christmas shopping that left many food retailers on the back foot last December also proves that more people are avoiding visiting stores altogether.

consumer backlashInferno commercial planning director Dominic Margetson was previously head of events as Asda. He says that, in the past, Asda tried taking the clutter out of stores during Christmas, opting for a “hygienic and efficient approach”. “But there was such a backlash. Consumer research said that the store had lost its Christmas cheer and had created a ‘bah humbug’ environment,” he says.

“We realised then that it’s easy for customers to complain about the clutter, but if you take it away, the alternative is worse,” he adds. “The key from a retailer perspective is to be relevant at the right time with a sufficient point of difference that satisfies needs.”

The trick for retailers, particularly in the food sector, is to get the balance between providing inspiring Christmas solutions for consumers, without overwhelming them with too many messages.

According to Millward Brown director Claire Dewhurst: “Because people are busier at Christmas, promotional displays need to be clearer. Furthermore, because they’re spending lots of money, price reductions may be more tempting than at other times of year. And because Christmas shoppers are looking for inspiration, they are also more open to new and interesting things than at other times.

“Empty retail space might work better than PoP activity for luxury goods – brands in this sector don’t need to worry about dazzling consumers around Christmas time. For other items, however, empty space just won’t ‘say’ Christmas.”

It is in the supermarkets that the challenge is greatest. Unlike other retailers that can rely on shifting unsold products during the January sales, Christmas-related food lines may as well be thrown out. But there is plenty of sales data to guide retailers through this seasonal time, and enough indicators to show what messages should be pushed and when.

time sensitiveAccording to Margetson, Christmas booze is bought at the end of November, confectionery and groceries are bought during the first two weeks of December. Barcodes indicate that items for the great day of feasting – those items with a “best-before” date of December 26 – are purchased from December 14 onwards.

FPP Brand Communications director Dave Glendinning says: “In supermarkets, there is often a tendency to de-clutter in terms of peripheral PoP, but this can be outweighed by an increase in Christmas lines, for example Christmas tins for biscuits and sweets. Some brands introduce Christmas packaging, like Coca-Cola which reinforces its ‘ownership’ of Christmas with material that echoes its advertising.

“One area that tends to see excessive activity at Christmas is in the alcoholic drinks category – for example, liqueur brands trying to drive one-off seasonal purchases with gift packaging, free glasses • or cocktail recipe books. And while it can be argued that clutter confuses, it has to be remembered that the shopper is in a different frame of mind at this time of year. Dwell time increases, purchasing patterns are different and shoppers are looking for excuses to indulge themselves.”

all in good tasteBut not all retailers approach Christmas the same way. Geoff Clinton, business development manager at PoP and data provider Pierhouse, says his company’s client – Waitrose – takes care to ensure the Christmas message does not dominate its retail space: “This is a continuation of a general approach to signage and ticketing that uses a consistent and clean backdrop to make promotional messages stand out. This is more effective than having a range of promotional material competing for the shopper’s eye.

“For 11 months of the year, we are asked to provide highly targeted, on-brand messaging for use in-store. Logically, if these messages are right for January to November, they will still be right in December. There is a real understanding at Waitrose and Pierhouse of the importance of maximising the effectiveness of the in-store environment. This does not mean maximising the font size or the colour stock.”

But Clinton acknowledges that the lack of Christmas cheer in stores like Waitrose and, to a lesser extent, Marks & Spencer, works because of the customer demographic. He adds: “The messages at Waitrose are always high quality, they never shout at you.”

However, some retailers claim they provide a retail environment that is demanded by consumers. Although it could be argued that consumers don’t ask for constant advertising messages, it is true that they have become more demanding.

No excusesMargetson adds: “Consumers used to be relatively forgiving, but not any more. Going into a supermarket on Christmas Eve, they expect to be able to buy a turkey. A few years ago, shoppers would have accepted they fact that they had all sold out. But not now. Also, all the signs are that Christmas is coming later and later. The spend in the two days before Christmas is more than it ever used to be.”

Regardless of how retailers choose to push the Christmas message, it is obvious to everyone that shoppers want the process to be made as easy as possible. According to Beswick Design founder Cris Beswick: “The swamped environments we encounter make it more difficult to complete the daunting task at hand. There’s too much focus on the ‘wow’ factor – tinsel, grottos and snow – and no sense of balance. We need to remember these are the same customers with the same desires and needs that shop all year round – they are just buying more, and buying for other people. Retailers still need to focus on key products, key lines and key messages.”

Shoppers fed up with the dazzle can opt out of the Christmas scrum by shopping online, so retailers have to be careful not to push consumers too far.

Beswick adds: “There is a strong case for minimising and being more considered in all areas – turning down the volume on Christmas a little and turning it up on products. It’s great to create a bit of theatre or event ambience, but – let’s face it – everyone knows it’s Christmas already, and the ‘wow’ factor should not overshadow the ‘ease’ factor.”•

Inventor James Dyson could have a point. Just as he was lambasting the poor innovation record of British companies in a speech at Tuesday’s Marketing Society Conference, Unilever seemed to prove his case by announcing 240 job cuts in its new product development division. Britain’s biggest advertiser (Unilever increased its adspend 7% last year to […]

Reader’s Digest Association, the US magazine publisher, is seeking sponsors for a national spelling competition for children, which will launch in the UK next year. The National Word Power Challenge is based on a quiz in the Reader’s Digest magazine, which challenges readers to identify word meanings. The competition has been running in the US […]

If you’ve ever wondered what the secret of staff morale was, look no further than a bit of something sweet on a midweek afternoon. Customer publishing agency August Media surveyed its staff recently to find out their favourite perk. It seems that gym memberships, bonuses and the like cut no ice at the year-old company […]