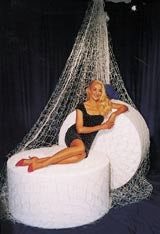 Launching new brands is becoming increasingly risky, according to the Pacesetters UK 1999 survey, compiled by Information Resources and based on research conducted last year.

The level of success for new brands has fallen from one in six in 1995-96, to one in seven in 1997-98. For those high-achieving products, the rate of return for manufacturers can be significant both in turnover and in meeting their strategic marketing objectives. Pacesetters’ terms of success were defined as a brand having achieved either two per cent of category share or over £1m in annual sales.

Brands that have made the grade share a number of common attributes. These include the type of brand name, level of trade distribution, and trade and marketing support over the first 24 weeks of launch.

The research found that brands launched under an existing name already known to consumers, were more likely to succeed. In the case of grocery launches overall, 13 per cent of launches were successful. Where the products were already known, 15 per cent were successful compared with only 6 per cent for new brand names.

Good distribution proved essential to success: on average, successful grocery brands attained 67 per cent distribution in multiple retailers, compared with an average of 17 per cent for unsuccessful launches.

The Pacesetters study found that the most successful companies are those which innovate, either with a new product or an update or refinement of an existing product. Extensions of well-known brands which performed well included Tampax Satin and Lurpak Spreadable Butter. These products combined improved technology, design and effectiveness – as seen in the three leading brands.

Similarly, an increasing tendency to snack on the go saw new confectionery and snack products feature at the top of the table.

However, products with health benefits also performed well. The lower fat Eden Vale Ski Extra Fruit Yogurts and Walker’s Max crisps headed the list. The new Ribena Tooth Friendly cartons featured at number 13 and Jacobs Vitalinea came in at number 21. It is clear that brands sharing the product characteristics of innovation and convenience or health have the potential to be most successful.

Of the brands featured in the analysis, three-quarters attained distribution of 60 per cent or more and many were promoted in the critical first four weeks of launch. In compiling this ranking, products launched between January and December 1998, which attained at least 30 per cent national distribution with a £1m turnover, were also considered.

Given the different launch dates, the final ranking is calculated from annual sales for each brand, based on full calendar-year launch curves for the different product sectors. Adjustments have been made to those with less than 12 months of sales data. This gives a true comparison, so that the most successful launches could be determined.

In summary, early trade promotion, effective distribution, a well-established brand and the incorporation of a convenience factor or a health benefit into the product are all likely to contribute to the success of a product. Packaged goods manufacturers should take notice of these benchmarks so as to maximise the potential success of future launches.