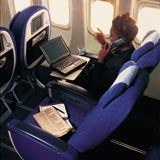 The world of the affluent consumer is a difficult one for many brands to penetrate. However, the most elusive segment of this group is the international business community – people who spend much of their time either in different countries or travelling between them.

This group is difficult to reach both geographically and professionally. They are constantly on the move and have little time to absorb the thousands of media messages vying to catch their attention as they move from one country to another. Having such a hectic lifestyle, it is natural that when they have time to catch up with the news and world events, this group of people tends to turn to the international media.

A recent report, View from the Board, commissioned by media agency Universal McCann, CNN, BBC World, Time, Financial Times, International Herald Tribune and The Economist, and conducted by NFO Worldwide, confirms the importance of international media to the business community.

The qualitative research shows that respondents hold the international print media in high regard and believe that Business Week, The Economist and Time, to name but a few, are unrivalled in their delivery of unbiased quality editorial, independent of the political, economic or social policies of individual markets.

Readers of these publications seek insight and a global perspective that they believe is unavailable elsewhere. In addition to the in-depth news analyses offered by international print media, international television channels, such as CNN and BBC World, allow them to stay in touch with breaking news and provide a rolling update of news events from around the world. The findings also reveal that international media are perceived to be much broader in their business and geographical editorial coverage than national media, enabling senior executives to absorb a plethora of news issues from a global perspective. This in itself is helpful in the decision-making process at work, particularly for international executives keen to keep abreast of business issues and to gain an insight into attitudes and cultural differences of foreign countries.

More specifically, international media help these affluent consumers keep up with the latest trends and developments in their respective industries, and to adapt this into best practice in their own organisations. It is also a good resource tool for monitoring the competition and informs them about international situations that could affect their business or industry.

Furthermore, respondents feel that access to international media exposes them to novel ways of thinking about the news and business issues that may affect their careers and professional lives. They say that this means they are better informed about international affairs, which in turn enhances their self-esteem in business and social situations.

Due to the perceived influential role of international media, media owners have a responsibility to deliver the news agenda in a trusted way, untainted by government control or influence.

In addition to the attractions and benefits of international media, the report also revealed that affluent consumers still turn to national media, such as The Times in the UK or Le Figaro in France, for more general information including sports news and weather reports. Although national news is clearly the main attraction, it offers international travellers more general information and day-to-day news, such as local issues. This shows that advertisers should be aware that the influence of national media does extend beyond a country’s borders.

The findings of the report support many of the perceived benefits of the international media. These can be backed-up by Media Brand Values, a report that will be launched later this year by Objective Research and BSB Media. Using data from a pilot study in Europe, the results reveal an upscale survey profile, with 72 per cent of respondents involved in steering groups or committees, while half are involved in identifying or evaluating new business ventures.

This data also shows that among readers of international weeklies, such as The Economist and Time, almost six out of ten consider these publications to be helpful for their work and 47 per cent consider them to be influential and a useful source to quote or refer to. On the other hand, the perceptions of national print brands among readers of nationals are notably lower.

Turning to television, 42 per cent of respondents consider international channels to be helpful to their jobs and 29 per cent consider them to be influential. However, when asked which channels they find stimulating and challenging, respondents cited national channels, which tend to have a broader range of programmes and therefore a wider appeal, much more often.

The affluent international business community is likely to seek quality in their brand selection in both a professional and personal capacity. This is reflected in the media they consume and in the marketing messages they absorb. Since this group is constantly on the move, brands looking to reach this elusive market need to cut through the clutter in an appropriate media environment. With this in mind, international media should be a primary consideration.

J Walter Thompson is to create a television campaign for Nestlé Rowntree’s Kit Kat, killing off the brand’s 47-year-old ‘Have a break, have a Kit Kat’ slogan.

British Gas is set to launch a “paperless bill” initiative next year, which will encourage customers to pay their bills via mobile phones. The launch will be supported by a multi-million pound advertising campaign starring Ricky Tomlinson, created by Clemmow Hornby Inge. The gas and electricity company is also planning to launch text message alerts […]

…P&G is to launch a new range called Lacoste Touch of Pink later this month. The range includes an eau de toilette, shower gel and roll-on deodorant and will be available in Boots and department stores.