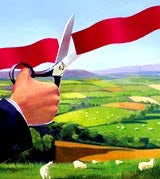 A quarter page ad, appearing in the national press over the past fortnight, has revealed what appears to be one of the most fundamental shifts in the Government’s tourism strategy for England in the past two decades.

The ad, funded by the English Tourism Council (ETC), implored tourists to enjoy the “fantastic” array of attractions and activities on offer across the country over the Easter holidays. There’s nothing very controversial about that – anyone would welcome an attempt to turn around the collapse in tourist spending that has accompanied the foot and mouth outbreak.

Fears of tourists carrying the devastating disease across the country have led to the closure of many attractions and footpaths, and this has knocked &£1bn a month off England’s tourism turnover as trade has dried up from Cumbria to Cornwall. The ETC ad simply set out to assure people that three-quarters of the country’s attractions were be open on Easter weekend, and that there was “heaps to do”.

But when the ETC was set up as a wholly-funded body by Chris Smith’s Department of Culture, Media &amp; Sport (DCMS) in July 1999, it was billed as: “A new strategic national body for England…with a remit focusing mainly on research, quality issues and advocating sustainable tourism.”

Marketing and promoting English tourism were intentionally left out of the ETC’s remit. Instead, it would be down to the regional tourist boards, which are funded jointly by local authorities, businesses and the DCMS, to promote and market their regions. England as a whole would not be promoted, though the British Tourist Authority was to continue its task of attracting visitors to the UK from abroad.

This arrangement was decried at the time as “political correctness gone mad,” as the policy was intended to prevent the Scottish and Welsh marketing efforts being swamped by their larger neighbour. While devolution has given Scotland and Wales more power to promote their countries as tourist destinations, England has lagged way behind in branding terms. It is only the foot and mouth crisis that has opened the argument on how England should relaunch its tourism industry when the disease is finally conquered.

So the ETC ad, created by Ogilvy &amp; Mather and entitled “England – The great getaway”, appeared to reveal a major U-turn in government policy – the ETC had at last been handed the task of marketing England as a tourist destination.

But a DCMS spokeswoman says the ETC is involved in marketing only because of the crisis, and its role as a purely strategic body has not changed. The crisis has meant “having to tweak things”. She says that she “understands” criticisms that the ETC has no expertise in marketing, but adds that “it has not been left on its own: it has been able to draw on the resources of trained advertising individuals at the Central Office of Information.”

And Dr June-Alison Sealy, the CBI’s head of tourism, says: “The ETC has stepped into the breach admirably.”

Naomi Cohen, head of communications at the ETC, says the ad will be judged on its effectiveness, and the council’s own research indicates it has already helped shift people’s attitudes to taking trips over the Easter period. “The foot and mouth situation has highlighted the need for somebody to be doing this type of work.” There are more ads planned for the two May Bank Holidays. She says these three holidays are crucial as they will set the tone for English tourism in the all-important summer months. Each campaign will have a budget of over &£1m, money provided by the Government to confront the crisis.

Cohen refuses to comment on whether the campaign is a dry run for the ETC to be handed a permanent role in marketing England as a destination.

But some say the ad itself reveals breathtaking naivety, and shows how little experience the ETC has in running marketing campaigns. It does not even include the England brand logo, created by the ETC only last year.

Julian Calderara, deputy managing director of Burkitt DDB, an agency which has a strong track record of running tourism campaigns, says of the ad: “I think this is atrocious. It is in such poor taste after we have seen the pictures on TV of those poor farmers and animals suffering. The ad adopts a game show host “come on down” tone, when it should be more sympathetic.”

And Bob Cotton, chief executive of the British Hospitality Association, says: “This crisis has shown that we have to review the marketing structure for England. Scotland has its own tourist board, as does Wales. The ETC was set up as a wholly strategic body, and the regional tourist boards have marketing roles.

“This crisis has shown the weakness of that structure. There will have to be a review of the role of the ETC.

“One questions whether the ETC has the marketing expertise to actually run a campaign. It was set up to have no marketing role, then suddenly it is expected to produce an ad.”

Last Wednesday, culture secretary Chris Smith held the latest in a series of strategic meetings about the tourism industry called the “tourism forum”, attended by operators and members of trade associations. It was here that the ETC delivered its blueprint for the recovery of the English tourist industry and repeated its call for an extra &£35m in funding this year to run advertising campaigns and PR in order to draw visitors back to the English countryside.

Some have interpreted this as an attempt by the ETC to get its oar into the marketing waters, and some of the money is expected to be used for ETC-controlled campaigns promoting England.

The foot and mouth crisis has focused minds on the tourism industry in the short term, but many feel that more needs to be done to improve the long-term situation.

An industry in trouble

According to the CBI’s “Targeting tourism, the agenda for change” document, which was published in March, tourism in the UK has suffered a slow decline, while globally the tourism industry grew by 7.4 per cent last year. The UK’s tourism industry is worth some &£64bn a year, contributes six per cent of the total GDP and employs seven per cent of the working population, says the report.

Much of the UK’s recent poor performance can be attributed to the high value of the pound, but surprisingly, for an organisation representing the nation’s business interests, the CBI calls for better centralised planning on issues such as transport, environment and other aspects of the nation’s infrastructure. This sounds like a call for Soviet-style central control. What next? Director-general Digby Jones leading a rousing chorus of Keep the Red Flag flying while unveiling a statue of Karl Marx outside the CBI’s Centrepoint headquarters?

The CBI quickly reverts to form in the report, and says that automatic upgrading of the minimum wage, and changes in employment law, could combine to make life difficult for many small businesses in the UK tourism industry.

It also identifies “a failure to ensure quality” as a key problem for UK tourism. The report says: “Tourism has a disproportionately high number of small businesses, many of which are under-managed and under-funded… Failing operations, particularly in the accommodation and visitor attractions sector, should be encouraged to move out of tourism thereby reducing the long tail of under-performing businesses.”

A brand for Britain?

Angie Petkovic, head of marketing for Compass Holidays, which runs walking tours in the UK, attended the tourism forum. She says the problem of the high pound is not insurmountable, because gradually people get used to the fact that the UK is more expensive. If it is made attractive enough as a destination, tourists will eventually come anyway – trading down from five star to three star accommodation if necessary.

But she also criticises the strategy of having English tourism promoted by regional boards. “We have been papering over the cracks for some time now. We’ve seen the rail crisis, BSE and flooding, and it has given people the feeling that the UK is an unhealthy place to be – we have to address that.

“We have to get it together. We’ve got to get a brand for Britain and start telling people how good that product is, and not have individual regions competing against each other. There is no feeling of pulling together or that there is a British brand.”

She says foreign visitors do not come to visit Dorset, Bath or the Lakes, or even England, Wales or Scotland – they are buying the whole UK experience, and this is what must be marketed to them.

It takes a crisis

Again it has taken a crisis to reveal the inadequacies of the UK’s policy-makers. It took the deaths of four passengers in the Hatfield rail accident to bring to public attention the fact that many miles of rail track suffer from hairline cracks, the foot and mouth crisis to reveal that livestock were being moved around the country with few controls, and BSE to reveal that cattle were being fed on their own species’ meat.

Tourism is far more important to the future prosperity of the UK than meat production, and is perhaps on a par with rail travel. But still England appears to languish as a “non-destination” when it comes to tourism marketing. The ramshackle approach to branding and marketing – perfectly exemplified for many in the ETC’s “England – The great getaway” campaign – will have to be addressed in full when the crisis dies down.

In the words of the CBI report: “It is increasingly clear that the ETC is inadequately resourced to assist the Government in achieving its targets. The Government needs to enable the ETC to adopt a stronger leadership role for English tourism.”

Perhaps Government ministers will add a review of English tourism marketing to the long list of reviews they have promised for after the election, and after the foot and mouth crisis has finally burnt out.